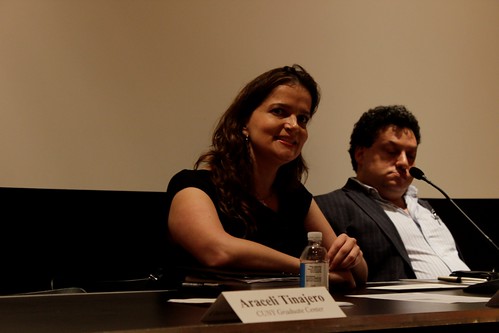 Seth Fein is Director of Graduate Studies of the Institute of Latin American Studies at Columbia, where he teaches. His book Transnational Projections: The United States in the Golden Age of Mexican Cinema will be published by Duke. He is now working on a new book, The Revolution Will Not Be Televised, and a documentary, Our Neighborhood, about Washington’s mobilization of Latin American TV to contain Castro across the 1960s. He is also making with Sophie Ziner, Radio Controlled, a documentary about the subculture of RC car and plane enthusiasts in NYC. He consulted on and appeared in the BBC’s The Thirties in Colour about documentary film culture and Mexico in the 1930s. Professor Fein also teaches at Barnard, where his courses include The Idea of the Western Hemisphere and Projecting American Empire on Film.

Araceli Tinajero is Associate Professor of Spanish at The Graduate Center and City College of New York. She is the author of Orientalismo en el modernismo hispanoamericano; El lector de tabaquería (Eng. El Lector: A History of the Cigar Factory Reader); and Kokoro, una mexicana en Japón. Tinajero is the editor of Cultura y letras cubanas en el siglo XXI; of Exilio, cosmopolitismo y globalización en el arte y las literaturas hispánicas (forthcoming); and the co-editor of Technology and Culture in Twentieth Century Mexico (U of Alabama Press, 2013). She is the founder of The City Reading Club and the co-founder of the Mexico Study Group at the Bildner Center for Western Hemisphere Studies. Tinajero is the Book Review Editor of Transmodernity: Journal of Peripheral Cultural Production of the Luso-Hispanic World.