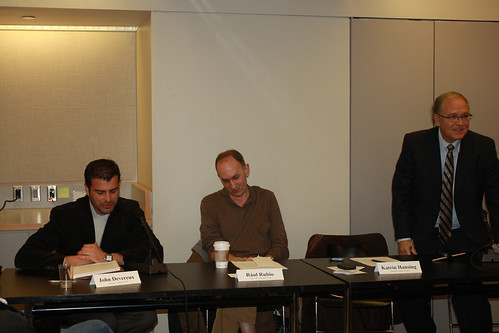 New Approaches to Cuban Material Culture
Raúl Rubio, John Jay College, CUNY
Raúl Rubio’s research on Cuban material culture studies cultural materials (objects and subjects that include memorabilia and popular culture) and their economic contexts both on and off the island. With a premise that not all Cuban-oriented materials are produced on the island territorially, Rubio dissects contemporary meanings of Cuban nationalisms and Cuban imaginaries. Engaging the current situation in Cuba, he argues that one cannot speak of Cuba and what is Cuban without considering the historical and contemporary cultural signifiers. Professor Rubio’s talk will offer a summary of his published work on Cuban material cultural studies and present his ongoing research amidst current times in Cuba.

South-South Migration between Cuba and Africa
Katrin Hansing, Baruch College, CUNY
Katrin Hansing’s talk will look at the identities and transnational ties of migrants from the South who have migrated to other southern, urban contexts; i.e. South-South migration and transnational ties. This will be done through the specific case study of the large scale labor migration of Cuban health care workers to various African countries, specifically Mozambique. Based on anthropological field research in Cuba and Mozambique, this talk will focus on the lives, realities and changing identities of the Cuban community in Mozambique as well as their relations back to Cuba. Particular attention will be paid to how Maputo, the capital of one of the world’s poorest yet economically fastest growing African countries is perceived and experienced by these professional migrants, who for the most part have never left Cuba before or had any experience living and operating in a highly complex, capitalist, urban environment. Moreover given the highly controlled and politicized context of Cuba as well as challenges in communicating between the two countries how do these Cubans’ transnational ties to their homeland manifest themselves and what role do they play in their migration experience?

This panel presents three emerging perspectives in the vibrant field of Cuban studies. These approaches by faculty highlight the depth and diversity of this field at City University of New York.

John Devereux is a Professor of Economics at Queens College of City University of New York. Previously, he taught at the University of Miami, and he received his doctorate in economics from the University of Chicago. Prof. Devereux’s research interests are in growth and economic history. The current project is his first foray into the Cuban economy. His previous research focused on economic growth, development and history. He has published numerous journal articles in publications such as the Journal of Money Credit and Banking, Journal of Economic History, Journal of International Money and Finance, American Economic Review, the Journal of Development Economics, Oxford Economic Papers, and Public Choice.

Raúl Rubio is Assistant Professor of Foreign Languages and Literatures at John Jay College of Criminal Justice of the City University of New York. A Hispanist and cultural studies scholar, Professor Rubio’s publications span Cuban and Cuban-American literature, film, and popular culture. His research on Cuban material culture spans from the global markets of Cuban-oriented products to contemporary island commodification. Rubio earned a Ph.D. in Latin American Literature and Cultural Studies from Tulane University in New Orleans and holds a Master’s degree in Spanish from Middlebury College in Vermont. His work has appeared in numerous academic journals and in the book Cuba: Idea of a Nation Displaced (SUNY Press). He is at work on his book Havana and the Aesthetics of Revolution.

Katrin Hansing is Associate Professor of Black and Hispanic Studies at Baruch College, City University New York. Prior to her tenure at CUNY she was Associate Director of the Cuban Research Institute at Florida International University in Miami. As an anthropologist she has conducted research in Cuba for the past 13 years. Her main areas of expertise include: race/ethnicity, religion, migration, internationalism and civil society. Currently she is working on projects addressing contemporary Cuban youth and the Cuban labor migrants to former COMECON countries. Dr. Hansing received her Ph.D. from St. Antony’s College, University of Oxford. She is the author of numerous academic and policy publications including: Rasta, Race, and Revolution: The Emergence and Development of the Rastafari Movement in Socialist Cuba (2006). She is also a frequent guest/speaker at conferences, policy forums, and the press. She lived in Cuba for over twelve years and is actively engaged in cultural and academic events and exchanges with the island.