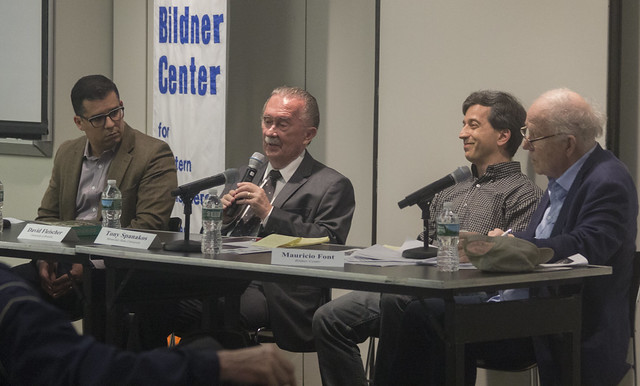 David Fleischer (Ph.D. University of Florida); renowned political analyst, chief editor of Brazil Focus, emeritus professor at the University of Brasilia. Fleischer has published extensively on Brazilian politics (Congress, elections, political parties, and political corruption), and North-South Relations. He was Director of the School of Social and Political Science at UniDF – Centro Universitário do Distrito Federal.

Tony Spanakos (Ph.D., University of Massachusetts) is Professor and Chair of Political Science and Law at Montclair State University. He is currently writing a book on domestic political change in Brazil and Venezuela and researching on the changes in global politics resulting from the emergence of countries like China and Brazil. He is the co-editor of Reforming Brazil (Lexington Books, 2004) and Conceptualising Comparative Politics (Routeldge, 2015). He is also the co-editor of the Conceptualising Comparative Politics book series for Routledge.

Mauricio Font (Ph.D., University of Michigan) is Director of the Bildner Center for Western Hemisphere Studies and Professor of Sociology at The Graduate Center and Queens College, CUNY. Some of his publications on Brazil include Coffee and Transformation in São Paulo, Brazil (Lexington Books, 2010), Transforming Brazil: A Reform Era in Perspective (Rowman & Littlefield, 2003), and The Brazilian State: Debate and Agenda (Lexington Books 2011, co-edited).