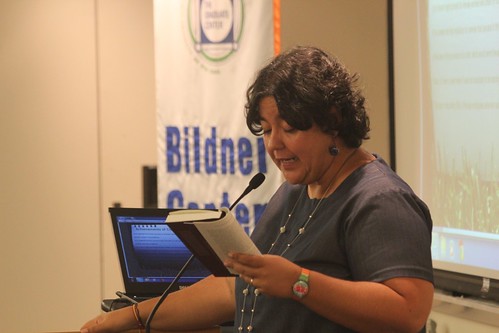 Damaris Puñales-Alpízar will focus on the literary production during the thirty-year relationship between the former Soviet Union and Cuba (from the 1960s to the 1990s). This period saw the emergence of a Soviet Cuban community of sentiments, recognizing itself as unique and unrepeatable, a generation of Cubans educated within Russian models: learning Russian language at schools, watching Soviet movies and cartoons, and even surrounding itself with Russian consumer goods.

Mabel Cuesta will analyze the works of a selected group of women writers from the 1990s, where we can identify some of the most significant displacements of Cuba’s society. These writers undertook the task of re-writing the national imaginary. Cuesta will address the form in which the representation of female characters documents silences and displacements.

Damaris Puñales-Alpízar is Assistant Professor of Spanish at Case Western Reserve University. Her research interests are Cuban literature and culture after the collapse of the Soviet Union. She is the author of Escrito en cirílico. El ideal soviético en la cultura cubana posnoventa (Cuarto Propio, 2012). Her articles have appeared in journals such as Revista Iberoamericana, Mester, La Habana Elegante, among others. She is currently working on a book project provisionally entitled The Flow and Circulation of Socialist Literature in Cuba.

Mabel Cuesta is Assistant Professor of US Latino and Caribbean Literature at the University of Houston. Her research interest focuses on Caribbean female writers both in their native island and abroad. She is the author of Cuba post-soviética: un cuerpo narrado en clave de mujer (Cuarto Propio, 2012). Her articles have appeared in journals such as Baquiana, Anales de la Literatura Hispanoamericana, Espéculo, Cuadernos Americanos, among others.