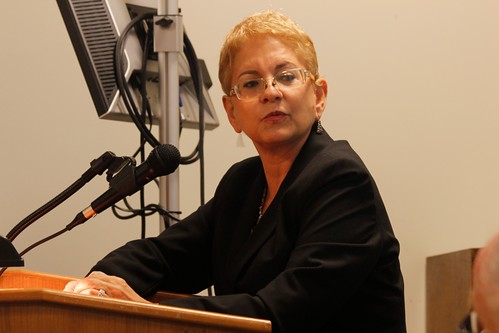 Zenaida Romeu is Orchestral Conductor, Choral Director, Professor at the Superior Institute of Art in Havana, and Director of the first all-woman string orchestra in Latin America, Camerata Romeu. Granddaughter of legendary Cuban musician Antonio María Romeu, she represents the third generation of a family of notable Cuban musicians. She is the founder of the chamber choir Cohesión (1982), choir Estudio Lírico (1989), and Camerata Romeu(1993). She has conducted and performed with important Cuban soloists and international figures such as French composer and pianist Michel Legrand, Brazilian composer, guitarist, and pianist Egberto Gismonti, and Mexican flautist and recorder player Horacio Franco. Romeu and the Camerata have been nominated for Latin Grammys and have won various Cuba Disco awards, the Marsella Medal, the Philadelphia Bell, Illustrious Guest of the City of Los Angeles, the Giraldilla Award, and the Order of Cuba.