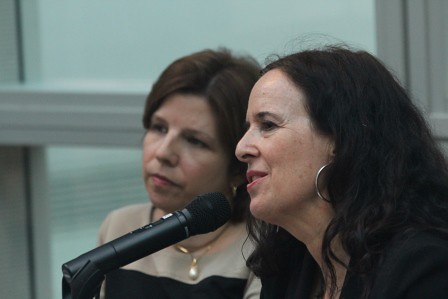 The Scroll and the Revolution: Jewishness in Cuba
Ruth Behar, University of Michigan

The Scroll and the Revolution: Jewishness in Cuba
Although a miniature community of a thousand people, the Jews of Cuba have attracted wide attention for choosing to shoulder the responsibility of safeguarding the Jewish legacy. At the same time, the community is losing people to emigration to Israel and the United States. Yet American Jews continue to travel to the island on “missions” to aid in the Jewish “rebirth.” Numerous tour operators organizing general interest trips to Cuba now routinely include a stop at the Jewish Community Center of Havana to round out their travel programs. In my talk, I will address this web of contradictions and paradoxes surrounding Cuba’s Jews as they forge a path between the scroll and the revolution, between Jewishness and Cuban citizenship, and confront the consequences of their own exoticism as the tourist gaze becomes a daily feature of their lives.

Chinese in the Making of Cuban Identity
At the outset of the new Cuban republic in 1902, Chinese laborers were officially excluded, portrayed as “aliens” to be expunged rather than incorporated into the national body. Anti-Chinese discourse and discriminatory legislation in Cuba echoed the rest of the Americas with its focus on sanitation and hygiene, morality, and unfair competition. Still, the Chinese in Cuba became incorporated into a conception of raceless nationhood. Drawing on my recent book, Chinese Cubans: A Transnational History, I will engage with the central question of how Chinese became part of the Cuban national and cultural landscape.

Ruth Behar is Professor of Anthropology at University of Michigan. She is the author of acclaimed books that bridge memoir and ethnography, including Translated Woman: Crossing the Border with Esperanza’s Story (1993), The Vulnerable Observer: Anthropology That Breaks Your Heart (1996), An Island Called Home: Returning to Jewish Cuba (2007). She is also the editor of Bridges to Cuba (1996), and co-editor of Women Writing Culture and The Portable Island: Cubans at Home in the World (2008). She directed Adio Kerida/Goodbye Dear Love: A Cuban Sephardic Journey, a film on the life stories of Sephardic Cuban Jews living in Cuba, Miami, and New York.

Kathleen Lopez is Assistant Professor of Latino and Hispanic Caribbean Studies and History at Rutgers University. She specializes in the historical intersections between Asia and Latin America and the Caribbean, focusing on post emancipation Caribbean societies, race and ethnicity in the Americas, international migration, and the history of the Chinese diaspora. Lopez is the author of Chinese Cubans: A Transnational History (2013). Her articles have appeared in Journal of Chinese Overseas, and Afro-Hispanic Review.