Bildner Center » Charting a New Course: The Politics of Globalization and Social Transformation 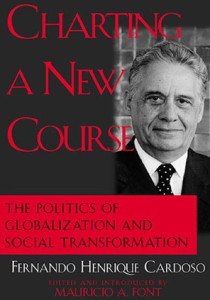 The book contains 26 essays written by Fernando Henrique Cardoso, Brazil’s President and world-class social scientist, at different stages of his impressive and influential intellectual trajectory. The book features an extensive Introduction by M. Font, and Cardoso’s bibliography by Danielle Ardaillon. For decades F. H. Cardoso has been among the most influential of Latin American scholars, his writings on globalization, dependency, and politics have reached a world-wide audience. This book, the third by Cardoso to come out in English, is the first to incorporate essays written during his tenure as president of Brazil. The transformation of Cardoso’s economic and political approach is nowhere better documented than in this broad-ranging collection of writings that span Cardoso’s early theoretical work through his pragmatic agenda for Brazil in a rapidly changing world economy. The book also traces the development of one of the world’s leading intellectuals, who took theory into the arena of policy when he became head of state.