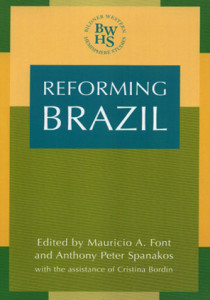 For years, successive governments in Brazil grappled with the vexing issues of unequal distribution of wealth and runaway inflation. In the 1990s, long-overdue reforms began to help tame inflation, streamline bloated and ineffective government and address chronic social ills. But problems and questions remain: Why is Brazil still so poor, and why is inequality so intransigent? Were some reforms counter-productive, or could they have been implemented better?

Reforming Brazil is a thought-provoking examination of these and other important issues facing Brazil today, from privatization and agrarian reform to entrepreneurial programs and hemispheric integration. Written by 11 Brazilianist scholars from a range of disciplines and intellectual traditions, the book offers compelling new insights for international policymakers, economists and scholars of Brazil.