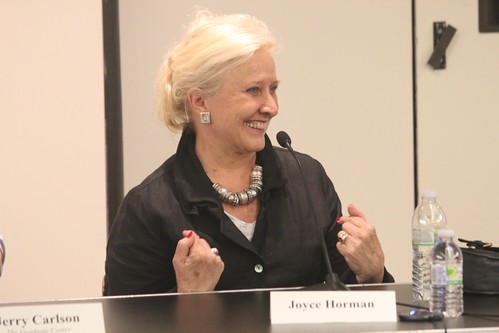 Joyce Horman, Wife of Charles Horman–US journalist who disappeared after the Chilean military coup in 1973

Missing is political filmmaker extraordinaire Costa-Gavras’s compelling, controversial dramatization of the search for American filmmaker and journalist Charles Horman, who mysteriously disappeared during the 1973 coup in Chile. Jack Lemmon and Sissy Spacek give magnetic, emotionally commanding performances as Charles’s father and wife, who are led by U.S. embassy and consulate officials through a series of bureaucratic dead-ends before eventually uncovering the terrifying facts about Charles’s fate and disillusioning truths about their government. Written and directed with clarity and conscience, the Academy Award winning Missing is a testament to Costa-Gavras’s daring.

Joyce Horman went to Chile with her journalist filmmaker husband in the spring of 1972. A week following the coup, Charles was kidnapped from their home, interrogated and executed in Chile’s National Stadium by Pinochet’s military. She has become an international spokesperson for justice for the victims of human rights atrocities in Chile. Joyce Horman serves as board chair of the Charles Horman Truth Foundation, and executive producer of the September 9, 2013, “Tribute to Justice.” The “Tribute” is intended to recognize the important contributions to the arrest and prosecution of General Augusto Pinochet, and to inform the public of the importance of Universal Jurisdiction in legally confronting the impunity of power. Under her direction, the Charles Horman Truth Foundation intends to produce annual conferences on the international pursuit of justice against human rights violators in the future.

Steven S. Volk (Ph.D., Columbia University) is Professor of History and Director of the Center for Teaching Innovation and Excellence (CTIE) at Oberlin College. Hespecializes in Latin American history, U.S.-Latin American relations, and museum studies. He has published widely on Chilean history, U.S. – Latin American relations, and Mexico. In 2011 he was named U.S. Professor of the Year by the Carnegie Foundation for the Advancement of Teaching. In 2001 he was awarded by the Chilean government for “his contributions in helping to restore democracy” in that country. He is currently working on a book-length project on how the Chilean coup of 1973 is remembered in the United States. He was on the staff of the North American Congress on Latin America from 1973-1984 and still serves on their Board.

Jerry W. Carlson is a specialist in narrative theory, global independent film, and the cinemas of the Americas. Professor Carlson is Director of the Cinema Studies Program in the Department of Media & Communication Arts at The City College and a member of the faculties of French, Film Studies, and Comparative Literature at the Graduate Center. He has lectured at Stanford, Columbia, Escuela Internacional de Cine y TV (Cuba), the University of Paris, and the University of Sao Paulo, among others.