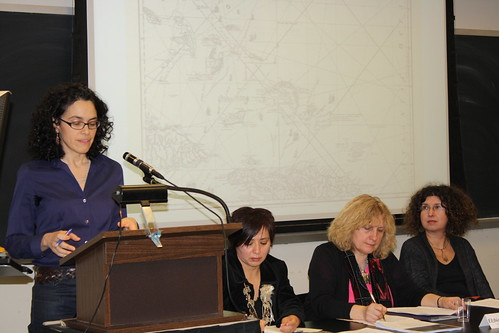 Slavery and the Discourse of Universal Rights: Haiti, Cuba, Venezuela
Sibylle M. Fischer, New York University
In this talk Fischer will show that the Haitian revolutionaries made use of the universal rights language in a way that is radically different from the uses we find in Cuban anti-slave-trade polemics and in Bolivar’s anti-slavery statements.

Haiti and Cuban Oriente: Contact Zones and Zones of Silence
Elzbieta Sklodowska, Washington University, St. Louis
Using the concept of intercultural crossing, which involves both interaction and violent rejection, in this talk Sklodowska will begin to explore the identity of the Cuban region of Oriente as a product of the “contact zone” with Haiti and Haitian culture. While citing mostly literary sources, Sklodowska will attempt to ground her exploration in an array of additional materials, including music, documentary film, and archival references.

Ada Ferrer is Associate Professor of History and Director of the Center for Latin American and Caribbean Studies at NYU. She is the author of Insurgent Cuba: Race, Nation, and Revolution, 1868-1898, winner of the 2000 Berkshire Book Prize in History. She is completing a book on the connections between Haiti and Cuba in the era and aftermath of the Haitian Revolution.

Sibylle Fischer is Associate Professor of Spanish and Portuguese Languages and Literatures at NYU. Her areas of research and interest include: Caribbean and Latin American literatures (Spanish, Portuguese, French); culture and politics in the nineteenth century; literature and dictatorship; literature and philosophy; cultural, aesthetic, and political theory; the Black Atlantic; the Haitian Revolution. She is the author of Modernity Disavowed: Haiti and the Cultures of Slavery in the Age of Revolution (Duke University Press, 2004) and Cirilo Villaverde, Cecilia Valdés or El Angel Hill. Trans. Helen Lane. Introduction and notes. Oxford University Press (forthcoming Oxford UP).

Elzbieta Sklodowska is a Randolph Family Professor of Spanish and Chair of the Department of Romance Languages and Literatures at Washington University in Saint Louis. She also serves as General Co-Editor for Latin American Literature for Revista de Estudios Hispánicos. Her fields of interest include nineteenth- and twentieth-century Caribbean narrative; literary and cultural theory; Cuban narrative and culture; poetics and politics of memory; testimonial literature. She has published widely on topics pertaining to Spanish American literature (60 articles or book chapters), including the following books: Testimonio hispanoamericano: historia, teoría, poética; La parodia en la nueva novela hispanoamericana (1960-85); Todo ojos, todo oídos: control e insubordinación en la novela hispanoamericana (1895-1935); Roberto Fernández Retamar y los estudios latinoamericanos (edited with Ben Heller). Her latest book, Espectros y espejismos: Haití en el imaginario cubano, was published by Iberoamericana-Vervuert in 2009, and she is currently looking forward to her sabbatical to work on a manuscript tentatively titled Still Lives: Cuban Literary and Cultural Production at the Edge of the Millennium. She is actively involved in teaching, mentoring, and university service. The Graduate Student Senate of Washington University acknowledged her contributions to graduate education with a Certificate of Recognition for Excellence in Mentoring award, and she has served on the Faculty Council of Arts & Sciences, the Academic Planning Committee, and the Graduate Education Task Force. Most recently, she has been appointed to the Provost’s Diversity Work Group and named a Fellow in the Provost’s Office.