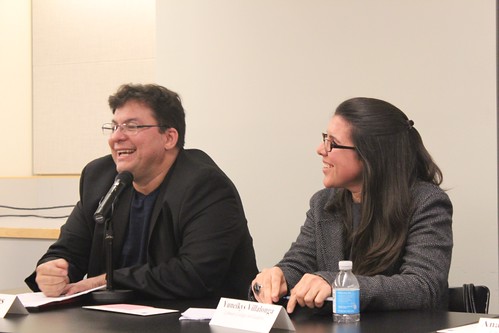 The Artist as Cultural and Commodity Producer
Elvis Fuentes, El Museo del Barrio
Drawing from the exhibition, Caribbean: Crossroads of the World, curator Elvis Fuentes will discuss the Cuban experience in Caribbean historical context. Given 20th century economic shifts from agriculture-based systems — such as sugar and banana plantations — to oil and tourism industries, one question is for how has Cuba’s role within the Caribbean geopolitical landscape changed. With limited oil reserves and reluctance to developing a service industry that official discourse depicted as servile and synonym of colonialism, many years of the Castro regime relied heavily on the sugar sector to supply the Socialist bloc. What was the role of the art market in this context? How have artists dealt with these issues throughout the years? And what was their intellectual role as opposed to artists in other Caribbean societies?

Cuban Art in the Wake of State Re-structuring
Yuneikys Villalonga, Lehman College Art Gallery
The “Special Period” of the 1990s brought a series of changes in Cuban society, driven by the new political and economic situation on the island. The development of tourism, the legalization of hard currencies, and the subsequent re-introduction of the private sector as well as the art market, among other governmental initiatives, affected the position and role of the artist. Also important was the change in policies carried out by the Clinton administration after over a decade of Republican isolationism. Villalonga will discuss contemporary art practices both by individual artists and institutions in response to this milieu. She will reflect on the role of curators in the conversation on Cuban contemporary art, including her own series, Invisible Curatorships, developed in Havana in the past decade.

About the speakers:
In El Museo del Barrio, Elvis Fuentes organized the first installment of the Permanent Collection Galleries (2009), two biennials of New York Latino Contemporary Art (The S Files 2007, 2011), and the blockbuster exhibition, Caribbean: Crossroads of the World (2012). Graduated from the University of Havana, School of Arts and Letters, Fuentes served as curator at the Instituto de Cultura Puertorriqueña, and The Ludwig Foundation of Cuba. He is currently pursuing Ph.D. in Art History at Rutgers University.

Yuneikys Villalonga joined the curatorial team of Lehman College Art Gallery in 2011. Graduated from University of Havana, School of Arts and Letters, she served as curator at The Ludwig Foundation of Cuba (1999-2003), and Habana Cultura, a platform for contemporary art sponsored by Habana Club International. As a freelance curator, Villalonga organized a series of Invisible Curatorships in Havana, and collaborative projects at Havana Biennial, Tirana Biennial, Albania, Glasgow International Festival, Scotland, and museums and universities in Sweden and England.