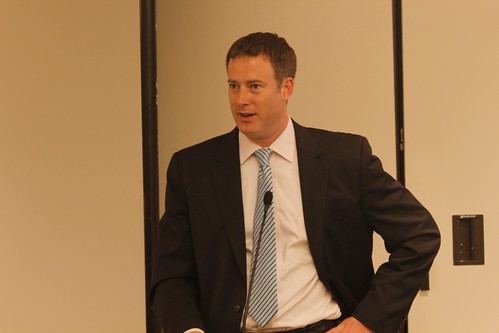 Adrian Hearn’s presentation focuses on China’s growing economic role in the Americas and its challenges to many countries in this region to develop new approaches to trade, investment, and development that favor economic sustainability, environmental responsibility, and political trust. Driven by Chinese demand, commodities now account for 60% of exports from Argentina, 47% from Brazil, and 75% from Chile.Around 90% of Latin America’s exports to China consist of mining and agriculture, but managing the resulting structural transformations is only one of the challenges. Equally important are strategies for negotiating with Chinese state owned enterprises, integrating growing Chinese communities into national social and economic systems, and promoting education about Chinese politics and culture.The presentation examines these challenges and draws parallels with Australia, where 59% of exports are commodities and China is the number one trade partner. As in Argentina and Brazil, concern about Chinese land acquisitions has prompted Australia’s Foreign Investment Review Board to reconsider its “national interest test” to ensure local economic benefit, environmental sustainability, and adequate employment standards. Australia and Latin America harbor a shared need to manage their changing circumstances, both in dialogue with each other and with Chinese partners.

Adrian H. Hearn is an Australian Research Council (ARC) Future Fellow and Coordinator of International Relations at the University of Sydney China Studies Center. He is Chair of the Latin American Studies Association (LASA) Section for Asia and the Americas, and is currently managing a project for the Australian Agency for International Development (AusAID) on Australia-Cuba cooperation in Asia-Pacific health systems. Focusing on China’s global impact, he has undertaken research in Cuba (three years), Senegal (one year), China (one year), and Mexico (one year). In 2008 Adrian was awarded a Kiriyama Fellowship from the University of San Francisco for his work on China’s relations with Mexico, and the Díaz-Ayala Award from Florida International University for his study of China’s historical ties with Cuba. Adrian’s publications include Cuba: Religion, Social Capital, and Development (Duke University Press, 2008) and China Engages Latin America: Tracing the Trajectory (Lynne Rienner, 2011).

Daniel P. Erikson is senior advisor for policy in the Bureau of Western Hemisphere Affairs at the U.S. Department of State since 2010. He advises the assistant secretary on issues related to policy and strategy, economic engagement, and multilateral affairs. Erikson previously served as senior associate for U.S. policy and director of Caribbean programs at the Inter-American Dialogue. Erikson has published more than sixty articles, numerous book chapters, and is the author of The Cuba Wars: Fidel Castro, the United States, and the Next Revolution, which won ForeWord Magazine’s 2008 Book of the Year Award for political science. Erikson has taught Latin American politics at Johns Hopkins’ School of Advanced International Studies and his past positions include research associate at Harvard Business School and Fulbright-Garcia Robles fellow in U.S.-Mexican business relations.