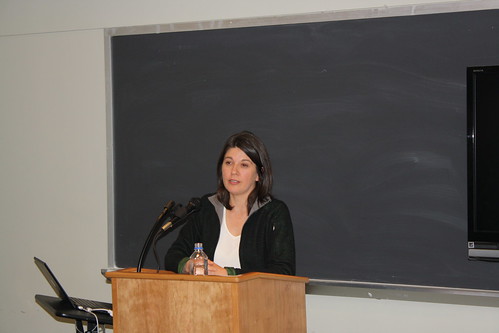 Taking the trajectory of its Parliamentary leader, Joaquim Nabuco, as a departure point, Angela Alonso will argue that Brazilian abolitionism configured a social movement, in the sense of a national network of anti-slavery activists, organizations and demonstrations. She argues that Nabuco operated as a broker between parliamentary and civil society activism, on one hand, and between the local activism and the global abolitionist network, on the other, bringing strategies used by earlier abolitionist movements, particularly the English one, into Brazilian activism.

Angela Alonso is a professor in the Department of Sociology at the University of São Paulo, Brazil; the coordinator of the Environmental Conflicts Area at Cebrap (Brazilian Centre of Analysis and Planning); and a researcher at the Development Research Centre on Citizenship, hosted by the University of Sussex (UK). In 2008-09 she will also be a Visiting Fellow at Yale University.
She has been studying the relations between culture and political action in Brazil, and has written two books on that subject: Ideias em movimento: a geração 1870 na crise do Brasil-Império (Ideas in Movement: The 1870 Generation in the Crisis of the Brazil-Empire) (Paz & Terra/Anpocs, 2002), which was awarded the CNPq (Brazilian National Council of Research) and Anpocs (National Association of Social Sciences Researchers) prize for the best Ph.D. thesis in social sciences; and, most recently, Joaquim Nabuco: os salões e as ruas (Joaquim Nabuco; the salons and the streets) (Companhia das letras, 2007), a biography of the main leader of the movement for the abolition of slavery in Brazil, which was selected as one of the top ten Brazilian biographies of the year (Jabuti Prize) as well as one of the top 51 literary books of the year by the Brazil Portugal Telecom Prize of Literature.
In addition, Ms. Alonso has published many articles about the Brazilian environmental movement and she is co-author (with Sergio Costa and Sergio Tomioka) of a book on environmental conflicts in Brazil, Modernização Negociada: expansão viária e riscos ambientais no Brasil (Negotiated Modernization: road extension and environmental risks in Brazil), Cebrap/Ibama, 2000).