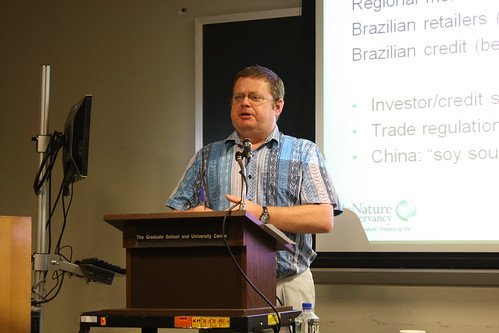 Biofuels, Beef and Biodiversity: Dealing with the Environmental Impacts of Agricultural Expansion in Brazil
David Cleary, The Nature Conservancy

Brazil is the most biodiverse country in the world but has also emerged as an agricultural superpower over the last decade. This has made dealing with the environmental impacts of agricultural expansion in Brazil an urgent issue for those concerned with climate change, but it has complex economic, social and political ramifications – and enormous potential to disrupt relationships between Brazil, the US, China and the EU.
This talk will cross biogeography with the geography of Brazil’s agricultural expansion to take a close look at exactly what the environmental implications of agricultural expansion in Brazil have been and are likely to be. It will focus on three key agricultural sectors, beef, soy and biofuels. There are major regional differences in the environmental impact of agriculture in Brazil, which will be drawn out. The talk will look at the legal framework of agricultural production in Brazil, and assess a number of proposed solutions – certification schemes, increased governance on agricultural frontiers, rural property licensing schemes. It will argue that a combination of circumstances – technological advances, consumer and regulatory pressures and cultural change in Brazil – make it possible to inject environmental responsibility into the operations of commodity markets that offer guarded hope for the future. Some examples of work along these lines underway in Brazil will be given, from a variety of organizations.

About the Speaker:
An anthropologist by training and one-time academic at Cambridge University and Harvard, David Cleary moved to The Nature Conservancy in 1999. He founded the Conservancy’s Amazon program, focusing it on the protection of indigenous lands and minimizing the impact of agribusiness. Author of a number of books and articles on environmental and other issues in Latin America, regular media commentator and blogger (http://blog.nature.org/author/dcleary/). Currently based in Rio as Conservancy’s Director of Conservation Strategies for South America, where he leads work with private sector, especially agribusiness, fisheries and forestry sectors. Lived in Latin America for 15 years, fluent in Portuguese and Spanish.