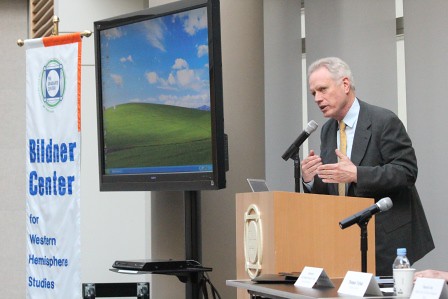 A New Global Player in the Americas: Brazil as a Bric
Thomas Trebat, Columbia University

Economic and political achievements since the 1990s have turned Brazil into the 6th largest economy and into an increasingly assertive player in global affairs. These developments have important consequences for South America, the rest of Latin America, and the Western Hemisphere as a whole. President Dilma Rousseff’s visit to the United States (April 9) and the upcoming VI Summit of the Americas (April 14-15, Colombia) present a great opportunity to discuss Brazil’s changing role in the Americas. This panel deepens on on-going study of Brazil at the Bildner Center.

Ambassador Seixas Corrêa was appointed as Brazil’s Consul General in New York in August 2011 and brings to his new duties a distinguished diplomatic career. He has served twice as Deputy-Minister of External Relations (1992-1993 ; 1999-2001) and represented Brazil as head of mission in Mexico (1989- 1992), Spain (1993-1997), Argentina (1997-1998), Germany (2005-2008), and the Holy See and the Order of Malta (Rome) (2009-2011). In 2002-2005 he was Permanent Representative of Brazil to the World Trade Organization and to the United Nations in Geneva. Ambassador Seixas Corrêa has also represented Brazil in many international conferences under the aegis of the United Nations and Mercosul. He was member of the Brazilian delegation to the WTO Ministerials of Doha (2001) and Cancun (2003). In Geneva, he chaired the WTO Working Group on Investment (2002/2003) and the International Negotiating Body (INB) of the World Health Organization that successfully negotiated and approved the Framework Convention on Tobacco Control (2002/2003).