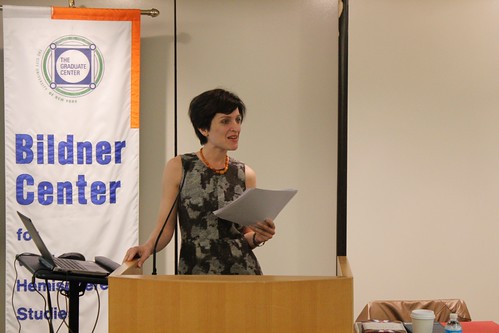 Dreaming in Russian. The Cuban Soviet Imaginary
Loss’ presentation will discuss the ways in which Cuba’s relationship to its Soviet benefactors lingered after the disintegration of the U.S.S.R. in 1991. Analyzing numerous literary texts and works of visual art, Loss also incorporates aspects of architecture, popular culture, the space race, and other strands to create a captivating new perspective on Cuban society. She will show that Cuba remembers and retains many aspects of the Soviet era, far from shedding those cultural facets as relics of the Cold War.

Cabrera Infante Pop
Quiroga’s presentation will examine Guillermo Cabrera Infante’s London period, particularly his work as a scriptwriter in the movies Wonderwall (1968) and Vanishing Point (1971), as well as his collection of essays O (1975). Cabrera Infante went into exile during the first years of the Revolution, and arrived in London when a cultural revolution was developing in this city. His relationship with pop art appears interesting when the agreements and disagreements between the Revolution (and its transnational flows) and the expression of youth revolt of the 60s of the twentieth century are examined. Faced with such exchanges and events, Cabrera Infante not only seems to be a highly integrated writer into the present, but one who takes an openly anachronistic role (as a participant at the same time as a critical consciousness).

Jacqueline Loss is Associate Professor of Spanish. She is author of Cosmopolitanisms and Latin America: Against the Destiny of Place (2005), and co-editor of Caviar with Rum: Cuba-USSR and the post-Soviet Experience (2012), and of New Short Fiction from Cuba (2007). Her critical essays have appeared in Nepantla: Views from South, Miradas, Chasqui, Latino and Latina Writers, Mandorla, and New Centennial Review, among others. Her research interests are Latin American Literary and Cultural Studies, Cuba, and Comparative approaches. Her book Dreaming in Russian will be published in Univ. of Texas Press.

José Quiroga is Professor of Spanish. He is author of Mapa Callejero (2010), Law of Desire: A Queer Film Classic(2009), Cuban Palimpsests (2005), Tropics of Desire: Interventions from Queer Latino America (2001), and others. He is co-editor of the book series New Directions in Latino American Cultures. Dr. Quiroga is presently completing an edited collection titled The Havana Reader, and a book on dissident practices in Cuba and Argentina, for which he has been awarded a Guggenheim Fellowship for the year 2010-2011.

Moderator: Licia Fiol-Matta is Associate Professor in the Department of Latin American and Puerto Rican Studies at Lehman College and The Graduate Center, CUNY. She is author of A Queer Mother for the Nation: The State and Gabriela Mistral (2002). Her essays have appeared in Papel máquina, Women & Performance, and Nepantla, among others. Her book The Politics of Voice: Gender and Popular Music in Puerto Rico, 1935-1995 will be published in Duke Univ. Press.