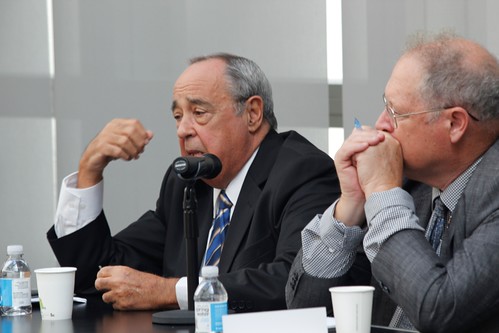 “Change to Remain Unchanged?”, a lunchtime conversation with José Raúl Viera Linares on the evolving process of reform in Cuba.  Viera served as First Deputy Minister of Foreign Affairs from 1981 to 1990, often participating in cabinet meetings, and represented Cuba at high level international conferences.  He received a Law degree from Havana University, a Certificate of English studies at Lousiana State University, and a Certificate of Studies of Property Rights in Cuba from the Union of Cuban Lawyers.

After the revolution Viera served as a voluntary teacher with the Institute of Agrarian Reform and as manager of a sugar mill.  His diplomatic career included postings in Spain, Honduras, Chile, Bolivia, Counselor at the Cuban Mission to the UN (1966-1970), and Deputy Minister in charge of International Organizations. He served as legal adviser to three state companies, concluding his professional work with Inmobilaria del Tourismo (Tourism Real Estate) from 1998 to 2010.  Viera and his wife Maria Cecilia Bermudez have translated into Spanish for publication in Cuba two books by Dr. Louis A. Perez, Jr. of the University of North Carolina,  On Becoming Cuban. Identity, Nationality & Culture and Cuba in the American Imagination. In his talk he will share his entirely personal perspective on Cuba today, the history of his generation, and the impact of US policy today.

Julie Skurski was appointed Distinguished Lecturer in Anthropology at the Graduate Center, City University of New York in 2009. She also serves on the Graduate Center’s Atlantic Studies Interdiscpilanry Seminar, Governing Board. Previously, she taught at the University of Michigan in the departments of Anthropology and History, and was the Associate Director of the Doctoral Program in Anthropology and History. Her books include States of Violence, coedited with Fernando Coronil (2006) and Anthrohistory: The Question of Discipline, co-edited. She is now at work on Civilizing Barbarism: Nationhood, Masculinity, and Mestizaje in Early Twentieth-Century Venezuela.