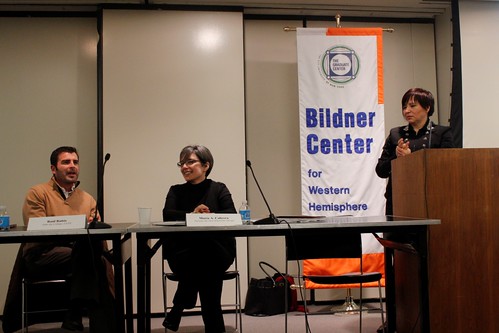 Exilic, Diasporic, & Global Contexts
Raul Rúbio, John Jay College, CUNY
The topics of material goods, materiality, and material culture(s) in relation to Cuba bring to mind a wide-range of possibilities and an equal amount of socio-political nuances to such deliberations. Cuba deals with material needs, changes in policies pertaining to material exchange, and materiality in the cultural realm. Outside Cuba, things Cuban have also garnered meaning and weight. Raúl Rubio will offer an overview of the theoretical considerations pertaining to the study of Cuban material culture(s) and will focus particularly on exilic, diasporic, and global contexts.

Raúl Rubio is Associate Professor of Foreign Languages and Literature at John Jay College (CUNY). His research is grounded in the field of material culture, which examines a wide-range of artifacts, from cultural commodities to the museum archive. Professor Rubio received a doctorate in Latin American Literature and Cultural Studies from Tulane University. Rubio’s publications have appeared in numerous academic journals, including: Studies in Latin American Popular Culture (U. of Texas Press), Letras Hispanas, among others. Rubio is completing a monograph titled La Habana: cartografías culturales and is involved in other research projects, including, a theoretical piece on ethnic humor in the stand-up comedy genre.

María A. Cabrera Arús graduated from the University of Havana, with a Master’s degree in Social Psychology, and from the New School for Social Research with a Master’s degree in Sociology. She is currently writing her PhD dissertation on the material culture of Cuban socialism. She has worked at the Oficina Nacional de Diseño Industrial in Cuba and marketing agencies in Puerto Rico. She has being instructor at the University of Havana and Parsons the New School for Design, where she currently teaches.

Araceli Tinajero is Associate Professor of Spanish at The Graduate Center and City College of New York. She is the author ofOrientalismo en el modernismo hispanoamericano; El lector de tabaquería (Eng. El Lector: A History of the Cigar Factory Reader); and Kokoro, una mexicana en Japón. Tinajero is the editor of Cultura y letras cubanas en el siglo XXI; of Exiliados y cosmopolitas del mundo hispánico (Verdum, 2013); Orientalisms of the Hispanic and Luso-Brazilian World (DÃ­az Grey, 2013)) and the co-editor ofTechnology and Culture in Twentieth Century Mexico (U of Alabama Press, 2013). She is the founder of The City Reading Club and the co-founder of the Mexico Study Group at the Bildner Center for Western Hemisphere Studies. At the present time Tinajero is the Book Review Editor of Transmodernity: Journal of Peripheral Cultural Production of the Luso-Hispanic World.