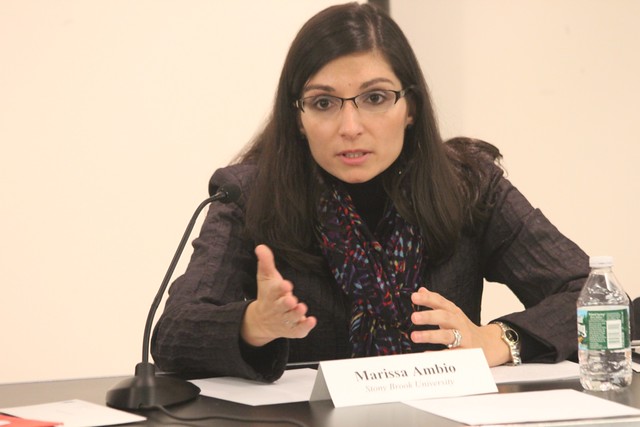 Cubans in New York Before Martí: Cirilo Villaverde
A sizable and well-connected literary and politically active Cuban community had been established in New York since the early nineteenth century. This community grew dramatically after the failed Manicaragua conspiracy of 1848, led by Narciso López, which brought the writer Cirilo Villaverde to our shores. Villaverde, who had published a series of romance novels in Cuba before his dramatic escape from prison and subsequent exile, wrote his masterpiece Cecilia Valdés in New York, where he lived until his death in 1894, with only two brief visits to Cuba. His lengthy stay in New York had a profound impact on the development of his political and social ideology, and completely transformed his masterpiece from a brief costumbrista narrative into the monumental anti-slavery novel that made him immortal.

Cuban émigré periodical production during the Ten Years War
In his biography of fellow Cuban émigré Juan Clemente Zenea, Enrique Piñeyro describes the publishing efforts of separatists in Cuba as “la misión espinosa.” While many Cubans later immigrated to New York City during the Ten Years War to establish political organizations and publish periodicals in favor of Cuban independence, their involvement in New York’s publishing industry remained “una misión espinosa.” This talk examines the role of periodicals as conduit for, and challenge to, the articulation of Cuban national identities. From Zenea’s Revista Habanera to the illustrated periodical El Ateneo, this study explores how periodical publishing sought the consolidation of elite and popular classes as well as Latin American solidarity to assert Cuba’s national profile.

Marissa Ambio is Lecturer at Stony Brook University. She specializes in Latino and Latin American literature and cultural production, particularly the periodical production of Cuban émigrés in New York during the Ten Years War. Her current research focuses on the illustrated periodical and its use of visual culture to promote public education, and its relation to other national institutions of the same purpose, particularly the museum. Ambio has published in journals such as Hispania, among others.