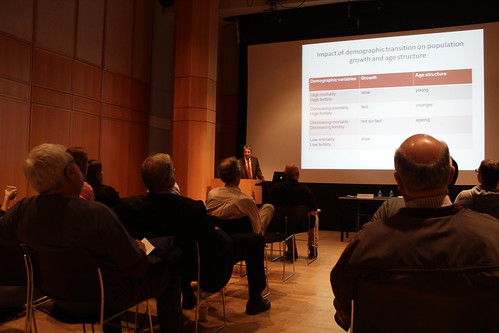 Countries in Latin America and the Caribbean are in the midst of a period of profound demographic change which will lead to a dramatic shift in the age structure of the population, with sharp declines in the proportion of children and increases in the proportion of older persons. Though they are at different stages in this process, the majority of countries in the region are currently in the midst of the period of the demographic dividend, which is characterized by a relative increase in the number of working-age people relative to those who are dependent upon them. However, sooner or later this favourable situation will end due to the rising demand for resources on the part of a progressively older population. The transition to economically-aged societies in Latin America and the Caribbean -in contrast to that of the more developed countries- will take place in a context of high and persistent levels of inequality and of lower per capita income and less developed political and financial institutions.

This new situation will pose unprecedented challenges to Latin American and Caribbean society and will require adjustments in diverse areas, especially in health and pensions. This is particularly the case of Cuba, which is already experiencing a very intensive process of population ageing. Ideally public policies should anticipate demographic changes, redesigning the financing mechanisms for social protection systems so that the increased pressure on public and private spending can be sustained financially without reducing the coverage and quality of benefits.

Paulo Saad (Ph.D., University of Texas) is Chief of the Population and Development Area at the Population Division of the United Nations Economic Commission for Latin America and the Caribbean (ECLAC). Prior to ECLAC he worked at the Population Division of the Department of Economic and Social Affairs of the United Nations in New York. Throughout his professional career Mr. Saad has worked on a variety of projects related to population ageing and currently coordinates the project “Intergenerational Transfers, Population Ageing and Social Protection in Latin America and the Caribbean” with support from the International Development Research Center (IDRC) of Canada. The project is an integral part of a global undertaking under the general coordination of the University of California, Berkeley.