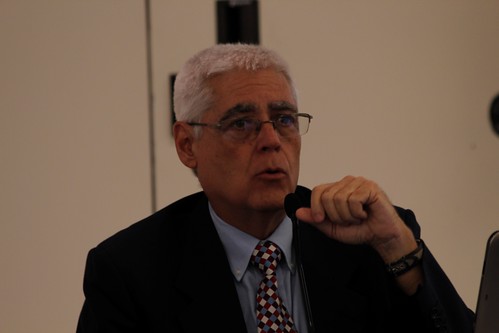 Armando Nova, University of Havana
Property represents the economic base upon which society’s structures and coordination mechanisms are based and operate. It plays a vital role in the allocation of resources and output, the determination income levels, and the distribution of income for producers and the general population. Evolving property forms are one of the most resilient aspects of post-socialist economic transformations. This presentation provides a Cuban perspective on the complex topic of evolving property forms under the current process of economic transformations (actualización), and explores the recent evolution of property forms in Cuba with a particular emphasis on the agricultural sector.

Armando Nova is a senior researcher and professor at the Center for the Study of the Cuban Economy (CEEC) at the University of Havana and is currently in residence as Adjunct Research Scholar at the Institute of Latin American Studies (ILAS) at Columbia University. He earned his doctorate degree in economics at the University of Havana in 1989 and his BA in economics at the University of Havana in 1969. He has conducted more than 84 research studies on the Cuban economy and has published more than 65 articles in different Cuban and international journals. He is the author of La agricultura en Cuba: evolución y trayectoria, 1959-2005 (Editorial de Ciencias Sociales, 2006), Aspectos económicos de los cítricos en Cuba (Editorial Científico-Técnica, 1988) and a third book as well as co-authored two other volumes.

Mario González-Corzo (Ph.D., Rutgers University) is Associate Professor at the Department of Economics at Lehman College of The City University of New York (CUNY), where he teaches graduate and undergraduate courses in economics. His research interests and areas of specialization include Cuba’s post-Soviet economic transformations, with a particular focus on the evolution of non-sugar agriculture. Dr. González Corzo also works as Contributing Editor for the section on Cuban political economy and economics of the Handbook of Latin American Studies (HLAS) published by the Library of Congress. He is also a Research Associate at the Bildner Center for Western Hemisphere Studies (Cuba Project), and at the Cuba Transition Project (CTP) in the Institute of Cuban and Cuban-American Studies (ICCAS) at the University of Miami (FL), where he publishes Enfoque Económico.