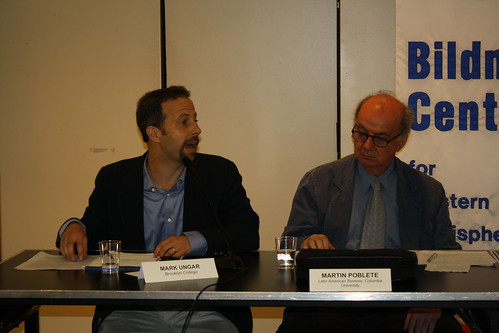 Causes of the Coup: Political and Socio-Economic Conditions in Honduras since 2000
Mark Ungar, Brooklyn College and The Graduate Center, CUNY

Political Crisis in Honduras: Role of the OAS and the Inter-American System
Martin Poblete, Columbia University Seminar on Latin America

Comments on the Promotion of Democracy in the Americas
Mauricio Font, Bildner Center and The Graduate Center and Queens College, CUNY

Mark Ungar is Associate Professor of Political Science at Brooklyn College and of Criminal Justice at the CUNY Graduate Center. Publications include the books Elusive Reform: Democracy and the Rule of Law in Latin America; Violence and Politics: Globalization’s Paradox; and the forthcoming Policing Democracy: Overcoming Obstacles to Citizen Security Reform in Latin America. Ungar has also been an advisor on police reform for international organizations and agencies in Latin America, including the national police and government of Honduras.

Martin Poblete is Chairman of Columbia University’s Seminar on Latin America and Professor of History. His research focuses on matters of church and state relations. He is the author of ‘From the Patronato to Pinochet’ in Religious Freedom and Evangelization in Latin America by Paul E. Sigmund.