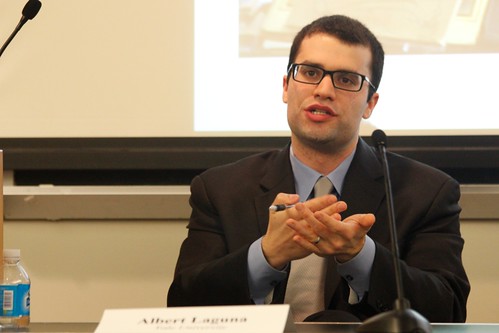 For the past 14 years, the Cuba Nostalgia Fair in Miami has celebrated pre-Castro Cuba through a combination of cultural spectacle and capitalist consumption. Businesses dedicated to selling objects like yearbooks, magazines, phone books, and casino chips – all produced before 1959 – dot the fairgrounds while Benny Moré boleros play. Often understood as ambivalent and “bitter sweet”, the celebratory tone of the fair reconfigures nostalgia as pure pleasure. But this pleasure-driven logic is in stark contrast to prevailing representations of Cuban Miami as dominated by more negative affective dispositions – the melancholia of exile coupled with rabid anti-Castro fervor. In a city that is rapidly undergoing profound generational turnover, what can an event that sells itself as a journey to the nostalgic past tell us about the future of Cuban Miami?

Albert Laguna is Assistant Professor of Ethnicity, Race & Migration and American Studies at Yale University. His research and teaching interests include transnational Latino/a literatures and cultures, humor theory, performance studies, and the Cuban diaspora. His current book project, The Politics of Pleasure and Play in Latino Literature and Performance, examines how “play” creates modes of discourse that provide critical perspectives of the dominant culture while simultaneously forging community and maintaining transnational ties through a pleasurable narrative economy. His article, “Aquí Está Alvarez Guedes: Cuban Choteo and the Politics of Play,” published in Latino Studies, won the 2012 Article Award from the Latina/o Studies Section of the Latin American Studies Association.