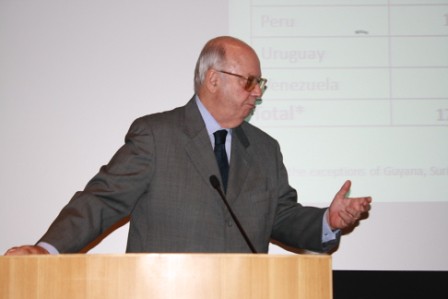 Ambassador Seixas Corrêa was appointed as Brazil’s Consul General in New York in August 2011 and brings to his new duties a distinguished diplomatic career. He has served twice as Deputy-Minister of External Relations (1992-1993 ; 1999-2001) and represented Brazil as head of mission in Mexico (1989- 1992), Spain (1993-1997), Argentina (1997-1998), Germany (2005-2008), and the Holy See and the Order of Malta (Rome) (2009-2011). In 2002-2005 he was Permanent Representative of Brazil to the World Trade Organization and to the United Nations in Geneva. Ambassador Seixas Corrêa has also represented Brazil in many international conferences under the aegis of the United Nations and Mercosul. He was member of the Brazilian delegation to the WTO Ministerials of Doha (2001) and Cancun (2003). In Geneva, he chaired the WTO Working Group on Investment (2002/2003) and the International Negotiating Body (INB) of the World Health Organization that successfully negotiated and approved the Framework Convention on Tobacco Control (2002/2003).
Ambassador Seixas Corrêa has been a professor of International Relations and of Diplomatic History at Instituto Rio Branco, the unit of the Foreign Ministry responsible for the formation of Brazilian diplomats. He has written extensively on many topics related to foreign policy and history. In 1993, he was elected to the Brazilian Historical and Geographical Institute (IHGB) of Rio de Janeiro. A graduate of the Rio Branco Institute, he also holds a Law degree from the Candido Mendes University in Rio de Janeiro. Before his appointment as Ambassador, Seixas Corrêa served in Bonn (1970-71), the United Nations in New York (1971-74); and Argentina (1974-76); Washington (1979-83); and to the Brazilian Mission to the UNESCO (Paris, 1985-87). Before that, he held various other positions in the Ministry of External Relations. He served twice in the President’s Office in Brasilia (1983-1985, 1987-1989).

Stephanie R. Golob is an Associate Professor of Political Science at Baruch College, City University of New York (CUNY). Her research focuses on the role of ideas in policymaking, sovereignty under globalization, and the political and institutional dynamics of North American integration. Her work on North America has appeared in World Politics and Canadian-American Public Policy, and she has presented at numerous seminars and conferences on this theme, including those sponsored by the Association of Canadian Studies in the U.S. (ACSUS); the Woodrow Wilson International Centre for Scholars; the Council on Foreign Relations; the Canadian Privy Council’s Policy Research Initiative (PRI); the Pan-American Partnership for Business Education; the International Studies Association (ISA); the American Political Science Association (APSA); the Latin American Studies Association (LASA); the Bildner Center for Western Hemisphere Studies at the CUNY Graduate Center; and the Rockefeller Center at Dartmouth College. Most recently, Dr. Golob has joined a tri-national North American Research Linkages project coordinated at the Universidad Nacional Autónoma de México (UNAM). Her current research focuses on the Security and Prosperity Partnership of North America (SPP, or ASPAN).
The recipient of a Fulbright-Hays fellowship, Dr. Golob has lived and worked in Mexico City, as a visiting scholar at the Instituto Tecnológico Autónomo de México (ITAM), and in Ottawa, as a visiting researcher at the Norman Paterson School of International Affairs at Carleton University. At CUNY, Dr. Golob has been awarded a Whiting Teaching Award in the Humanities (junior faculty leave, 2002-03), as well as an Andrew W. Mellon Resident Fellowship at the Center for the Humanities at the CUNY Graduate Center (2006-07). Dr. Golob holds a B.A. in Latin American Studies from Yale University, and an M.A. and Ph.D. in Political Science from Harvard University.