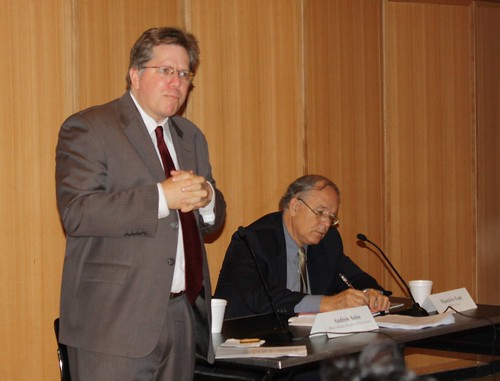 Mexico and the US face a series of shared challenges: drug trafficking organizations that have become increasingly violent, a global economic slowdown that is undermining the well-being of citizens on both sides of the border, significant migration without a corresponding regime for managing it, and a health epidemic that threatens citizens in both countries. Can the two countries find ways of working together to manage these issues and improve the livelihood of citizens on both sides of the border? A new Wilson Center study suggests that strategic partnership between the two countries is possible, but it will require considerable leadership from both governments. The recent visit by President Obama to Mexico has provided a good starting point for these efforts

About the Speaker:
Andrew Selee is Director of the Woodrow Wilson Center’s Mexico Institute, which promotes dialogue and policy research on U.S.-Mexico relations, and is part of the Center’s Latin American Program. He served as professional staff in the U.S. House of Representatives and worked for five years in Mexico.
Selee is editor or co-editor of several publications on US-Mexico relations, Mexican politics, immigration, and decentralization, including The United States and Mexico: More Than Neighbors, Invisible No More: Mexican Migrant Civic Participation in the United States (with Xochitl Bada and Jonathan Fox), and Mexico’s Democratic Challenges (forthcoming, with Jacqueline Peschard). He recently edited the Wilson Center’s report The United States and Mexico: Towards a Strategic Partnership.
Selee is an Adjunct Professor of Government at Johns Hopkins University and has been a Visiting Scholar at El Colegio de México. He is a Board member of the U.S.-Mexico Fulbright Commission (Comexus) and serves on the Council on Foreign Relations’ Task Force on Immigration.