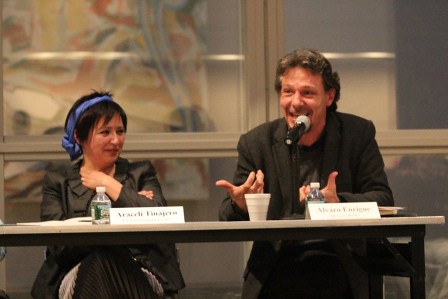 Evelyn Hu-DeHart, Professor of History and Ethnic Studies at Brown University and Director of the Center for the Study of Race and Ethnicity in AmericaÁlvaro Enrigue, Mexican Writer

Jose C. Moya, Professor of History at Barnard College and
Director of the Forum on Migration, Columbia University

Evelyn Hu-DeHart is Professor of History and Ethnic Studies at Brown University, and Director of the Center for the Study of Race and Ethnicity in America from 2002 to 2011. She is currently the Santander Visiting Scholar at Tsinghua University, affiliated with the Foreign Languages and Cultures Dept. and the Center for the Study of Chinese Entrepreneurship. For over three decades, she has been engaged in research on the Asian Diaspora in Latin America and the Caribbean, with focus on the history of Chinese and Japanese migration and settlement in Spanish America, including the early Spanish colony of Manila in the Philippines, which was governed from New Spain (Mexico) as the mercantile entrepot for the 250-year Manila Galleon trade, and which was inhabited by mostly Chinese, but also some Japanese.

Álvaro Enrigue (Mexico, 1969) is the award winning author of four novels and two books of short stories. In 1996 he was awarded the JoaquÃ­n Mortiz Price for La muerte de un instalador (The death of an installation artist). Enrigue’s work has been translated into several languages, including German, English and French. In 2009, he was awarded a Rockefeller Foundation Residence Fellowship at the Bellagio Centre to finish the manuscript of his latest novel, Decencia (Decency). He was the Whitney J. Oats Fellow in the Humanities Council at Princeton University in the Spring of 2011. He has being Literary Editor at Letras Libres magazine and Fondo de Cultura Económica -the reference publishing house for the Spanish language–, and Editorial Director of the National Council for The Arts in Mexico. He writes a column for El Universal newspaper in Mexico City. He currently lives in New York City, where he is fellow at the Cullman Center for Writers and Scholars of the New York Public Library.

Jose C. Moya is Professor of History at Barnard College, Director of the Forum on Migration, ex-Director of the Institute of Latin American Studies at Columbia University, and Professor Emeritus at UCLA. He also taught at the universities of San Andres in Argentina, Santiago de Compostela in Spain, and Paris; and has been invited lecturer at the universities of Vienna, Krakow, Leiden, Louvain, Fudan in Shanghai, Tel Aviv, Hebrew University in Jerusalem, and the Colegio de Mexico, among others. Professor Moya has authored more than fifty publications, including Cousins and Strangers: Spanish Immigrants in Buenos Aires, a book that received five awards and was the subject of a special forum in the journal Historical Methods for its contributions to migration studies. He edited, most recently, The Oxford Handbook of Latin American History(2011).