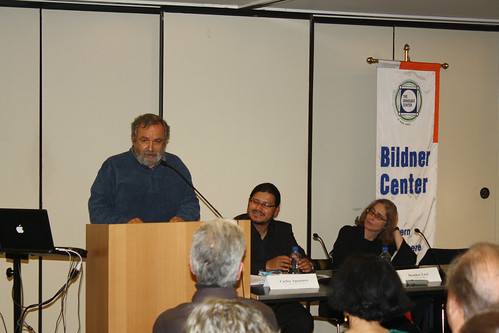 Cultural Nationalism, Corruption and Kitsch: Lucha Libre and Signification
Heather Levi, Temple University
Existing on the interstice between sport, theater and ritual, by the 1960s lucha libre was a “semi-clandestine” ritual, a sporting event strongly associated with the urban poor.  By the 1980s, its very stigma made it cause for celebration among the leftist avant-garde of Mexico City, valued as a symbol of authentic urban Mexican culture.  Wrestlers themselves argued that it was the only sport in Mexico uncorrupted by gambling and sponsorship.  Over the past ten year, however, it has become revalued by the Mexican middle classes as kitsche, and appropriated by advertisers, and even the PAN in the latest elections. The presentation will trace this transformation.

Blood, Science, Religion, Authority and Mental Control in Eight Movies of El Santo
Carlos Aguasaco, The City College of New York, CUNY
Mexican superheroes do not have and split personality like Superman/Clark Kent or Bruce Wayne/Batman. In fact it is possible to find them walking the streets of Mexico D.F. doing grocery shopping or having a good time at a night club. As superheroes, they do not have a private persona and yet they represent the deep and unresolved contradictions of Mexican identity. What idea of social mobility, if any, they represent? How are science and religion depicted and contrasted in their films? Are they defenders of justice or simple supporters of the law? To address these questions we will analyze the case of El Santo, a Mexican wrester/actor that starred in 52 feature films between 1958 and 1982. Our comments will be based specifically on eight movies: Santo vs. the Diabolical Brain(1961), Santo vs. The King of Crime (1961), Santo and Blue Demon vs. the Monsters(1969), Santo Vs The Terror Riders (1970), Santo in the Mummy’s Revenge (1971),Santo vs. Frankenstein’s Daughter (1972), Santo and the Tigress (1973) and Santo at the Border of Terror (1979).

Heather Levi is a cultural anthropologist and an assistant professor of anthropology at Temple University. She received a BA in anthropology from the University of Massachusetts in 1990, and a PhD (also in anthropology) in 2001 from New York University. The general focus of Levi’s research is on the relationship between performance practices, the global and local contexts from which they emerge, and the political uses to which they are directed. She has done ethnographic fieldwork on lucha libre (professional wrestling), and its place in urban popular culture in Mexico City. In addition to observing events and talking with individuals connected with the spectacle, she trained in lucha libre with a retired wrestler and his students. That fieldwork led Levi to view lucha libre as an arena in which to examine the connections between such analytical categories as mestizaje, class, gender, aesthetic values, mass mediation, and the state. It resulted in the publication of The World of Lucha Libre: Secrets, Revelations, and Mexican National Identity (Duke University Press 2008). She is currently doing research on street musicians and other marginalized performers, focusing on the neighborhood of Condesa in Mexico City.

Carlos Aguasaco is a Ph.D. candidate at Stony Brook University (SUNY) and was awarded the prestigious W. Burghardt Turner Doctoral Fellowship by the State University of New York. He holds an M.A. in Spanish from The City College of New York (CUNY) and B.A. in Literature from the National University of Colombia. Carlos has worked simultaneously as a high school teacher for the Board of Education of New York and as a part time Spanish lecturer at the Center For Worker Education at the City College. He is a member of the editorial committee of “Hybrido Magazine.” In the Fall 2002 he won a Blanche Mason Starweather Student Award for his project “Four Discoveries of America in William Ospina’s El pais del viento.” A sample of his work as a poet and translator was included in Red Hot Salsa Bilingual Poem On Being Young And Latino In The United States(Henry Holt, 2005). His short stories have been included in anthologies such as Pequeñas Resistensias 4 Antología del nuevo cuento norteamericano y caribeño published in Spain (2005). He is the co-editor of a series of anthologies: Encuentro 10 poetas latinoamericanos en USA (2003), Narraciones sin Frontera 27 cuentistas hispanoamericanos (2004) and Ensayos sin frontera -Estudios sobre literatura hispanoamericana (2005). Currently, he works with www.artepoetica.com, a website devoted to the promotion of poetry originally written in Spanish. His academic interests include the study of twentieth century Latin American popular culture and the residual practices it inherited from the Spanish Golden Age.