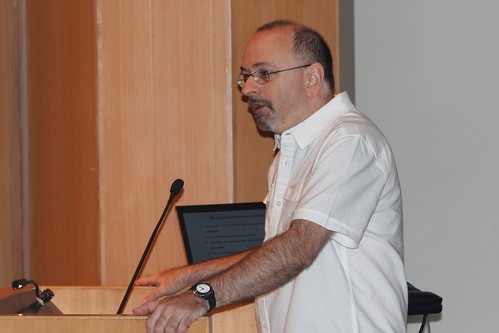 Brazil’s social communication system has faced many challenges since the beginning of democracy. Following the victory of the Partido dos Trabalhadores (PT) in the 2002 presidential elections, the long-standing demands of the social movements allied with the party’s broad and diverse base appeared likely to be implemented. This was the backdrop to the emergence, in the early years of the first Lula da Silva government (2003-2007), of policy projects designed to broaden and reshape the communication field. Due to opposition and a dubious commitment of the PT’s Federal administration to such policies, they have not been enacted until now. Relating these policies with the present day technological revolution, but most of all with the overall functioning of democracy in Brazil today, this panel will explore the extent to which this debate on media regulation may have become obsolete.

Fernando Lattman-Weltman is a political scientist and sociologist, specializing in political theory, media and politics, and Brazilian political institutions. Among papers and book chapters on these subjects, he is the author of A politica domesticada: Afonso Arinos e o colapso da democracia em 1964 (2005), A imprensa faz e desfaz um presidente: o papel da imprensa na ascensão e queda do ‘fenômeno’ Collor (1994), and is one the editors of theDicionário Histórico-Biográfico Brasileiro – Pós 30 (2001).

Lucas Ferraz is a Brazilian journalist working with Folha de S.Paulo newspaper since 2007. He has written about politics, corruption, presidential and regional elections, judiciary system, public policies and human rights. He also reported on crimes that happened during Brazilian dictatorship (1964-85) and the implications related to the fact that they are still unsolved. In addition, he has covered countries in Latin America while serving as Southern Cone correspondent based in Buenos Aires, Argentina.