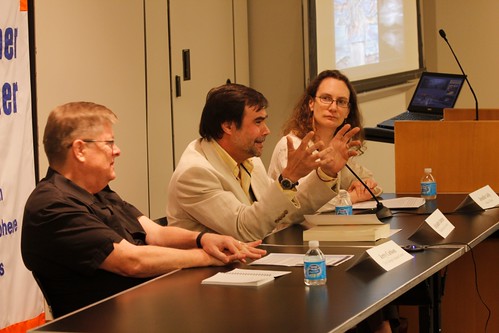 Re-thinking the Mexican Muralists
Beginning in the early 1920s, the Mexican mural movement was one of the first visual art avant-garde movements in the Western hemisphere. What made it different from others was its belief in art as a weapon in popular struggles over revolution, artistic freedom and cultural imperialism. Throughout the 1920s through the end of World War II, Mexican muralism was considered a central movement in modern art. The impact of the Cold War marginalized the movement, at times practically erasing its achievements. This brief talk will provide an overview of Mexican muralism’s achievements and failures, in light of recent critical scholarship. Its iconic figures, Rivera, Orozco and Siqueiros will be discussed, as well as lesser known artists and contexts.

Creating Pátzcuaro: Muralism, Tourism, and Nation-building in Cardenista Michoacán
As Governor of Michaocán and President of Mexico, Lázaro Cárdenas devoted considerable resources to transforming the region around Pátzcuaro, Michoacán into a destination for cultural tourism during the 1930s. The project included commissioning new monuments, buildings, and murals; developing local infrastructure; and creating a series of touristic destinations, including a Museum of Popular and Industrial Arts, archeological sites, and scenic overlooks. This paper examines muralism’s specific place within this multimedia project, noting ways in which muralism worked hand in hand with tourism to create new ways of seeing Pátzcuaro, in order to facilitate the project of national integration.

Alejandro Anreus is Professor in the Art Department at William Paterson University. His research interests are Modern Art, Neo-classic and Romantic Art, Modern Art of Latin America, American Art, and 20th Century Mexican Art. He is author of Orozco in Gringoland: The Years in New York (University of New Mexico Press, 2001); The Social and The Real; Political Art of the 1930s in the Western Hemisphere (Penn State Press, 2006; co-edited with Diana L. Linden and Jonathan Weinberg), and Mexican Muralism. A Critical History (in collaboration with Leonard Folgarait and Robin Adèle Greeley) (Univ. of California Press, 2012), among others. His articles have appeared in Art Journal, Third Text, Art Nexus and Encuentro de la Cultura Cubana. He is currently writing a monograph on Cuban-American painter Luis Cruz Azaceta.

Jennifer Jolly is Associate Professor in the Department of Art History at Ithaca College. She researches the intersection of art and politics in modern Mexico. She specializes in the work of the Mexican muralists. Broader research interests include understanding the Muralists within the context of international politics of the 1930s, the intersections of art and technology, and the regional dissemination of Mexican Muralism. Her current project investigates the art – murals, sculptures, and árdenas in Michoacán, Mexico, as part of a program of tourism development and national integration. His articles have appeared in Oxford Art Journal, Künst und Politik, among others.