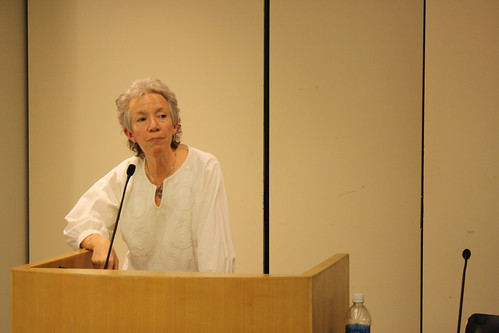 In her earlier work, Mexican Lives, Judith Adler Hellman told the story of fifteen rural and urban Mexicans and the strategies they invented to respond to economic and political changes totally beyond their personal control. In The World of Mexican Migrants, Hellman examines the lives of people for whom neither rural nor urban Mexico now offers any means to secure economic survival. Drawing on five years of in-depth interviews with migrants and the families they leave behind, Hellman explores the reasons that families pool their scarce resources to sponsor the border crossing of loved ones. She also looks at the dense networks formed in New York by documented and undocumented Mexicans who provide support to the new arrivals. This book is full of surprises and provides an intimate picture very much at odds with the common notions that dominate the migration debate in the United States about why Mexicans flow across the border and whether they hope to remain.

About the Speaker:
Judith Adler Hellman holds a B.A from Cornell University, and an M. Phil and Ph.D. in Politics from the London School of Economics. She is Professor of Political and Social Science at York University, a Fellow of the Centre for Research on Latin America and the Caribbean, and has been editor of the Canadian Journal of Latin America and Caribbean Studies. She is the author of Mexico in Crisis (NY: Holmes & Meier, 1978, 1983, 1988), Journeys Among Women: Feminism in Five Italian Cities (NY: Oxford UP, 1987), Mexican Lives (NY: New Press 1994, 1999), and The World of Mexican Migrants (NY: New Press, 2008) as well as articles on peasant movements, rural development, feminism, distance education, human rights, international migration in the Americas and and Europe, and social movements in Europe and Latin America. Her experience with fieldwork began in 1967 in the north-central desert of Mexico.