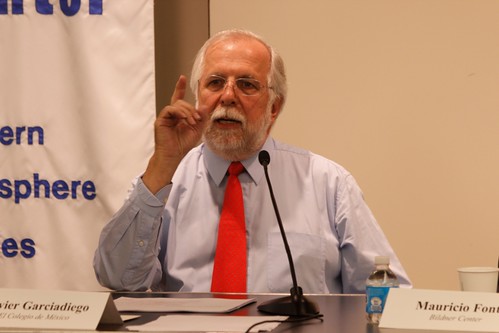 The return to power of the Partido Revolucionario Institucional is a good moment to revisit the question of the legacy of the Mexican Revolution in contemporary politics. The PRI exercised a near monopoly of power for seven decades — an era largely marked by stable single party (authoritarian) rule and corporatist-clientelistic incorporation of interests. The PRI embraced statism and economic nationalism during much of this period, but opened and liberalized the economy after the 1980s. The transfer of power to the PAN in 2000 marked a new era of competitive politics and democratization. Though politics became more tumultuous and new problems arose, the country maintained the new economic model. From the perspective of the PRI’s return to the national presidency in late 2012, what are the prospects for democratic governance  and political-institutional reform? In the light of the debates since 2000, what are the legacies of the Revolution? How did the Revolution shaped the nation’s search for progress? In general, what does the return of the PRI says about the legacies of the Revolution and what does it portent for Mexico’s future.

Javier Garciadiego is an internationally renowned Mexican historian specialized in the Mexican Revolution. He has been President of the Colegio de Mexico since 2005, an institution he joined as Research Professor in 1991. He is former director-general of the National Institute of Historical Studies on the Mexican Revolution (INEHRM) and has taught at the Universidad Nacional Autónoma de México (UNAM), the Instituto Tecnológico Autónomo de México (ITAM), and lectured at major universities worldwide. His publications include: Así fue la Revolución mexicana, en 8 volúmenes (coordinador académico general, 1985-1986), Rudos contra científicos. La Universidad Nacional durante la Revolución mexicana (1996), Porfiristas eminentes (1996), Alfonso Reyes (2002), La Revolución mexicana. Crónicas, documentos, planes y testimonios (2003), Introducción histórica a la Revolución mexicana (2006), andCultura y política en el México posrevolucionario (2006), among others. Dr. Garciadiego received a doctorate degree in History at El Colegio de México and in History of Latin America at the University of Chicago. He has been visiting scholar at St. Anthony’s College, University of Oxford; University of Chicago; Trinity college, Dublin; Complutense University of Madrid; and University of Salamanca. He was awarded the Great Cross of the Order of Isabella the Catholic by the Government of Spain (2009).

Mauricio Font is director of the Bildner Center for Western Hemisphere Studies and professor of sociology at The Graduate Center and Queens College, City University of New York. His research examines problems of development and reform in Brazil, Cuba, and Latin America as well as international cooperation in the Western Hemisphere.