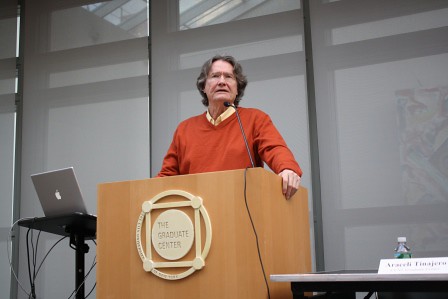 Moderator:
Araceli Tinajero, The City College of New York and The Graduate Center

John Mraz is Research Professor at the Instituto de Ciencias Sociales y Humanidades, Universidad Autónoma de Puebla (Mexico) and National Researcher III. He has published widely in Europe, Latin America, and the United States on the uses of photography, cinema, and video in recounting the histories of Mexico and Cuba. Among his recent books are Photographing the Mexican Revolution: Commitments, Testimonies, Icons (2012); Looking for Mexico: Modern Visual Culture and National Identity (2009); and Nacho López,Â  Mexican Photographer (2003). He directed the award-winning documentary videotapes, Innovating Nicaragua and Made on Rails: A History of the Mexican Railroad Workers. He has also curated international photographic exhibits in Europe, Latin America and the United States. He was recently a visiting professor at Princeton University.

James Krippner is Professor and Chair, Department of History, Academic Director of the Center for Peace and Global Citizenship and Director of Latin American and Iberian Studies at Haverford College. His first book, Rereading the Conquest: Power, Politics and the History of Early Colonial MichoacÃ¡n, Mexico, 1521-1565, was published in 2001 by the Pennsylvania State University Press. His second book, Paul Strand in Mexico, was published by Aperture in 2010.Â  He has also authored articles on sixteenth, eighteenth and twentieth century Mexican history and currently sits on the editorial board of the cultural history journal The Americas.  Krippner teaches widely on Latin American and global historical topics.  At present he is researching on the Latin American Baroque for a planned multi-volume study that will examine this idiosyncratic art form in Brazil and Cuba, the Andean World, and Mesoamerica.

James Wechsler is a scholar of Mexican art and the international visual culture of revolution. Over the past fifteen years Wechsler has lectured widely on the subject in Mexico and the United States. He has collaborated on numerous curatorial projects and has taught at Brooklyn College, City College, and Seton Hall University. His publications include “Seeing Red: Mexican Revolutionary Artists in New York,” in Deborah Cullen ed., Nexus New York: 1900-1945: Encounters in the Modern Metropolis, New York: El Museo del Barrio, 2009; “Diego Rivera’s May Day Sketchbook: Context and Analysis,” in MoMA at El Museo: Caribbean and Latin American Art from the Permanent Collection of The Museum of Modern Art, El Museo del Barrio, New York, 2004. Dr. Wechsler received his PhD. in Art History at the City University of New York Graduate Center in 2003. He is currently working on a book that discusses the cross-border interaction among artists affiliated with the Communist Parties in Mexico, The United States, and Europe.

Araceli Tinajero is associate professor at The City College of New York and The Graduate Center and is one of the founders of the Mexico Study Group at the Bildner Center for Western Hemisphere Studies. She is the author of Orientalismo en el modernismo hispanoamericano, El lector de tabaquería (in English: El Lector: A History of the Cigar Factory Reader). Tinajero is the editor ofCultura y letras cubanas en el siglo XXI and is currently co-editing Technology and Culture in Twentieth Century Mexico (U of AL P). Her last book, Kokoro, una mexicana en Japón will be presented on March 2, 2012.