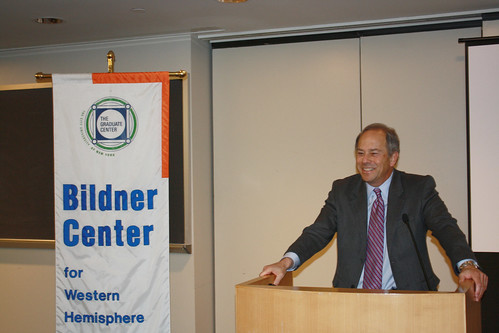 About the Speaker:
Robert Pastor is Professor at American University (AU) and the Founder and Co-Director of two Centers – on North American Studies and on Democracy and Election Management. As National Security Advisor for Latin American Affairs during the Carter Administration, he conducted the first secret negotiations with Fidel Castro since relations were broken in 1961. From 1985 to September 2002, Dr. Pastor was Professor at Emory University and Fellow and Founding Director of the Carter Center’s Latin American and Caribbean Program and the Democracy Project where he organized Election-Monitoring Missions to more than 40 countries around the world. He was a Fulbright Professor in Mexico, a Peace Corps Volunteer in Malaysia, and was nominated by President Bill Clinton to be Ambassador to Panama. Dr. Pastor has a Ph.D. in Government from Harvard University where he has taught and is the author or editor of 16 books, including Exiting the Whirlpool: US Foreign Policy Toward Latin America. He has just returned from a week trip to Cuba.