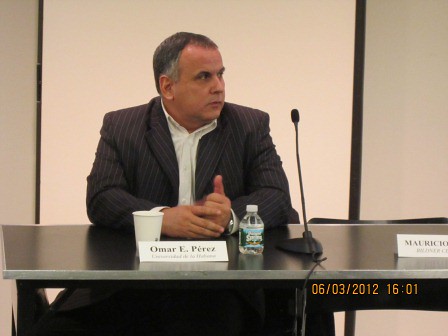 Omar Everleny Pérez Villanueva is Professor at the University of Havana and Director, of the Center for the Study of the Cuban Economy. Dr. Pérez Villanueva earned his doctorate at the University of Havana, M.A. at CIDE/AC (Mexico), and B.A. at the University of Havana. He has taught orlectured at various universities in Cuba, the U.S., Japan, France, Spain, Brazil, Puerto Rico, Mexico, China and other countries. He has published more than 70 works on the Cuban and the international economies. He is co-author of “Cuban Economy at the Startof the Twenty-First Century” (with Jorge DomÃ­nguez and L. Barberia); “Reflexiones sobre la economía cubana;” “Miradas a la economía cubana, volumes I and II;” “Cincuenta aÃ±os de la economía cubana,” “Cuban Economic and Social Development:Policy Reforms and Challenges in the 21st Century.”