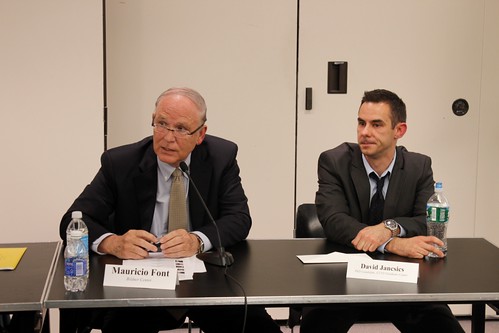 Planning and Market in the Cuban Economy
Armando Nova, CEEC, University of Havana
In this presentation Dr. Nova will examine the relative roles of market and state planning in the Cuban economy. He focuses on these economic mechanisms in regard to agricultural production and internal food market.

Socialist Transformations in Europe (CEE): Issues and Some Lessons
David Jancsics, Ph.D. Candidate, The Graduate Center, CUNY
Mauricio Font, Bildner Center for Western Hemisphere Studies
The transformations of Central and Eastern European societies offer a framework to address broad questions and policy issues about reforming socialism, including the Cuban case. This presentation explores CEE cases and dynamics before and after 1989-1990 to identify a core of issues and problems shaping the fate of independent producers and other small entrepreneurs in agriculture and other sectors. It highlights the role of market mechanisms and the second economy during the communist phase and the new property structures after reforms.

Armando Nova is a senior researcher and professor at the Center for the Study of the Cuban Economy (CEEC) at the University of Havana and is currently in residence as Adjunct Research Scholar at the Institute of Latin American Studies (ILAS) at Columbia University. He earned his doctorate degree in economics at the University of Havana in 1989 and his BA in economics at the University of Havana in 1969. He has conducted more than 84 research studies on the Cuban economy and has published more than 65 articles in different Cuban and international journals. He is the author of La agricultura en Cuba: evolución y trayectoria, 1959-2005 (Editorial de Ciencias Sociales, 2006), Aspectos económicos de los cítricos en Cuba(Editorial Científico-Técnica, 1988) and a third book as well as co-authored two other volumes.

David Jancsics is a Ph.D. candidate in sociology at the City University of New York, Graduate Center. His research interests include corruption, organizational networks, social and political changes in Eastern Europe, and elite groups. His dissertation examines how people at different organizational and social class levels view and deal with corruption in post-communist Hungary.

Mauricio Font is director of the Bildner Center for Western Hemisphere Studies and professor of sociology at the Graduate Center and Queens College, City University of New York. His research examines problems of development and reform in Brazil, Cuba and Latin America as well as international cooperation in the Western Hemisphere.