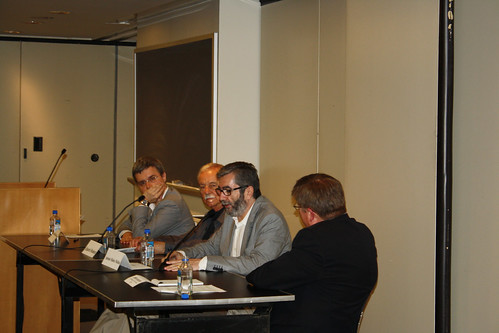 Juan Gómez-Jurado is a writer and journalist. He has worked for ABC newspaper, Canal + television and the Radio España, Cadena SER and Cadena Cope radio stations. He has been awarded several literary prizes for his short stories and novels, the most important of these being the 7th Torrevieja City International Novel Prize in 2008 for El emblema del traidor (The emblem of the traitor), published by Plaza & Janés (now available in paperback), with which Juan is now celebrating in 2010 the figure of three million readers worldwide.
After the international success of his first novel, Espía de Dios (God’s spy, published in 42 countries to date), he has become one of Spain’s most feted authors alongside Javier Sierra and Carlos Ruiz Zafón, as well as achieving his life’s dream: spending all his time telling stories. The launch of Contrato con Dios (Contract with God) confirmed his status (published so far in over 35 countries and still counting). So as not to abandon his passion for journalism completely, he still writes articles and a weekly opinion column in the La Voz de Galicia newspaper. One of his investigations as a reporter during a trip to the USA bore fruit as La Masacre de Virginia Tech (The massacre at Virginia Tech), his first and so far only work of non-fiction, which has also been translated into several languages.
His novel God Spy (2008) has been translated into English and published in the United States and his Contrato con Dios will shortly be coming out as The Moses Expedition.

After graduating from the University of Barcelona with a law degree, Eduardo Mendoza spent a year studying in London and returned to Barcelona to work as a lawyer. From 1973 to 1982, he lived in New York, where he worked as a simultaneous interpreter for the UN.
In 1975, he published his first novel, La verdad sobre el caso Savolta, which received the prestigious Critics’ Prize and was translated into over 20 languages. Other novels include El misterio de la cripta embrujada (1979), El laberinto de las aceitunas (1982), La ciudad de los prodigios (1986), La isla inaudita (1989), Sin noticias de Gurb (1990), El año del diluvio(1992), Una comedia ligera (1996), La aventura del tocador de señoras (2001), Mauricio o las elecciones primarias (2006), El asombroso viaje de Pomponio Flato (2008), Tres vidas de santos (2009).
He has also written stage plays in Castilian and Catalan Spanish (Restauració), as well as adaptations (Arthur Miller’s A View From The Bridge and William Shakespeare’s A Midsummer Night’s Dream). Some of his works have been filmed (La verdad sobre el caso Savolta, El misterio de la cripta embrujada and La ciudad de los prodigios). He has published translations of Edward Morgan Forster, William Shakespeare and Lord Byron. He lectured at the School of Translation and Interpretation in the Pompeu Fabra University.
Several of his novels have been published in English: The City of Marvels (1990), The Truth About the Savolta Case (1992), The Year of the Flood (1996), A Light Comedy (2003), No Word From Gurb (2007), The Mystery of the Enchanted Crypt (2009) and The Olive Labyrinth (2010).

Antonio Muñoz Molina studied journalism in Madrid and took a degree in Art History at the University of Granada. He is the author of the essay Córdoba de los Omeyas (1991);  his articles are collected in six volumes. His activities as a columnist were rewarded in 2003 with both the González Ruano Journalism Prize and the Mariano de Cavia Award. His narrative prose includes: Beatus Ille (1986), Icarus Prize, El invierno en Lisboa (1987), Critics’ Prize and National Literature Prize, both in 1988, Beltenebros (1989), El jinete polaco (1991), Planeta Prize and National Literature Prize in 1992, Los misterios de Madrid (1992), El dueño del secreto (1994), Nada del otro mundo (1994), Ardor guerrero (1995), Plenilunio (1997),Carlota Fainberg (2000), Sefarad (2001), En ausencia de Blanca (2001), Ventanas de Manhattan (  2004), El viento de la Luna (2006) and La noche de los tiempos (2009).
He served as Director of the Cervantes Institute in New York for two years (2004-2006). He took up his seat in the Spanish Royal Academy in 1995. He currently lives between Madrid and New York, and is married to fellow writer Elvira Lindo.
Several of his novels have been published in English: Beltenebros (Prince of Shadow, 1993),El invierno en Lisboa (Winter in Lisbon, 1999), En ausencia de Blanca (In Her Absence, 2007), Sefarad (Sepharad, 2008) and Beatus Ille (A Manuscript of Ashes, 2008, winner of the first prize in translation from the Queen Sofia Spanish Institute in New York).