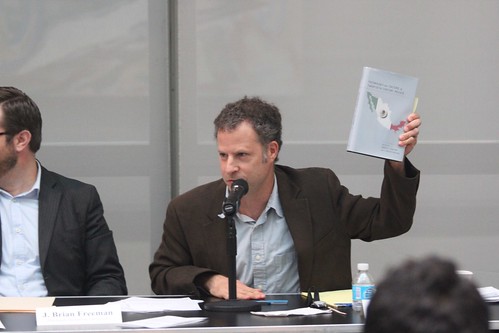 This broad-ranging interdisciplinary collection examines the multi-stranded relationship between technology and culture in a manner that enriches our appreciation of both concepts. Drawing upon the cutting-edge research of a talented international and intergenerational cast, this volume will be required reading for all who seek to understand Mexico’s long twentieth century.” –Gilbert M. Joseph, Farnam Professor of History and International Studies, Yale University.

Technology and Culture in Twentieth-Century Mexico–written by historians, literary scholars, social scientists, and cultural critics–tells the long-neglected story of technological change in Mexico. Contributors cover such topics as the effects of household appliances and innovations on the lives and gender roles of Mexican women; the ways that the proliferation of private cars and public conveyances produced novel dangers and altered spaces in and around Mexico City; and the consequences of “technoculture” on Mexican literary expression. Authors demonstrate the vital role that radio has played in both preserving and transforming indigenous languages and cultures; the changes that turn-of-the-century innovations in hygiene and public health had on Mexicans’ everyday lives and their codes of behavior; and the early recognition by Mexican political and military figures such as Pancho Villa and Porfirio Díaz of the enormous propaganda potential of new media technologies. The book also examines artists’ depictions of and responses to technology, reflected in works by painters such as Diego Rivera, José Clemente Orozco, and David Alfaro Siqueiros, and photographers such as Guillermo Kahlo and Tina Modotti.

Araceli Tinajero is Professor of Spanish at The Graduate Center and City College of New York. She is the author of Orientalismo en el modernismo hispanoamericano; El lector de tabaquería (Eng. El Lector: A History of the Cigar Factory Reader); and Kokoro, una mexicana en Japón. Tinajero is the editor of Cultura y letras cubanas en el siglo XXI; of Exiliados y cosmopolitismo del mundo hispánico; Orientalisms of the Hispanic and Luso-Brazilian World. At the present time Tinajero is the Book Review Editor of TRANSMODERNITY: Journal of Peripheral Cultural Production of the Luso-Hispanic World.

J. Brian Freeman is a visiting assistant professor of history at Fairleigh Dickinson University. His work has been published in various books and journals, including Studies in Latin American Popular Culture and the Journal of Latino-Latin American Studies. He is currently working on a book on the history of the automobile in twentieth-century Mexico.

Katherine Manthorne is a specialist in modern art of the Americas. She previously headed the Research Center at the Smithsonian’s American Art Museum, where she also served as executive editor of American Art. She has collaborated on museum exhibitions and publications including The Landscapes of Louis Rémy Mignot: A Southern Painter Abroad; El Barón de Courcy: Ilustraciones de un viaje, 1831-1833; Creation and Renewal: Views of Cotopaxi by Frederic Edwin Church; and Sand and Fog: The Luminist Paintings and Collection of James Suydam. Her interest in cross-currents across the Americas is reflected in her books Tropical Renaissance: North American Artists Exploring Latin America, 1839-1879 and Multiple Dimensions of American Art.