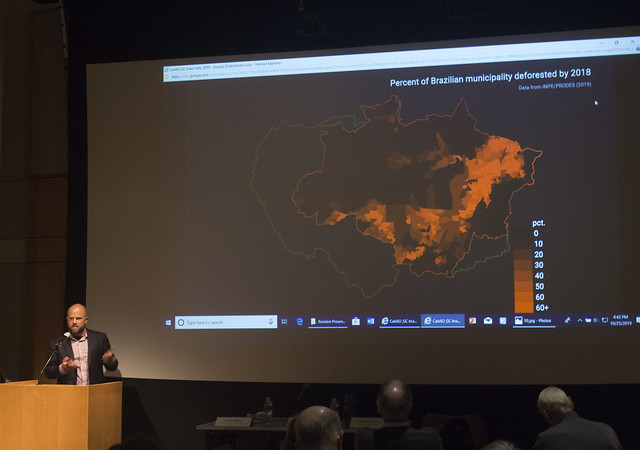 Cândido Rondon, a Brazilian military officer and explorer, is considered one of the foremost Brazilian heroes and patriots known for his lifelong support for the indigenous Brazilians. He was the first director of Brazil’s Indian Protection Services (later known at FUNAI) and supported the creation of the Xingu National Park. He spent his life exploring Brazil, including mapping the state of Mato Grosso, advocating for the indigenous peoples, and leading Theodore Roosevelt’s expedition into the Amazon. The Explorers Club of New York nominated him for the Nobel Peace Prize in 1957. Larry Rohter’s new book tracks Rondon’s paths in the Amazon and discusses how and who will arise to safeguard the Brazilian Amazon’s future.

Larry Rohter (M.A., Columbia University) served as a correspondent in Rio de Janeiro for fourteen years for Newsweek and later as The New York Times bureau chief. He is widely considered a top expert on Brazil. He is the author of three books about Brazil, the most recent of which is a biography of the explorer, scientist and statesman Candido Rondon, Rondon : Uma Biografia (Objetiva, 2019).

“What’s happening in the forests of the Amazon Basin?”

The Amazon Basin has seen a recent increase in interest with the news of fires and deforestation in the past few months. This talk will provide an overview of these deforestation and fire events, including the driving forces behind deforestation, as well as a vision of what the future of the Amazon may look like.

Anthony D. Cak (Ph.D., Indiana University) is the Associate Director of the Environmental Sciences Initiative at the Advanced Science Research Center, The Graduate Center, CUNY. His research focuses on landscape-level changes and development across the Amazon Basin, with particular focus on water. He specializes in machine learning and geospatial technology.