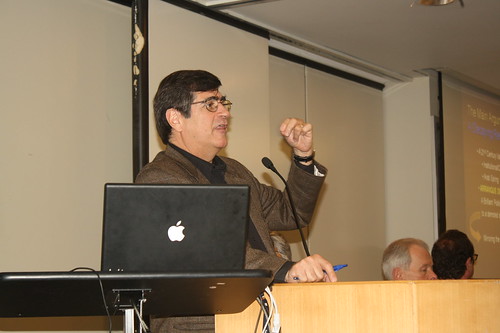 Harry Belevan-McBride is a Peruvian writer who has published a dozen books in Spain, Peru and other countries in the genres of short stories, novels, essays and drama.Literary critic Ricardo González Vigil refers to Belevan-McBride as on of the most lucid and fervent worshipers of fantastic literature. Several dissertations have been written about his work and some of his books have been translated into several languages. Belevan is also a diplomat, having served in various posts in countries of the Americas and Europe in the past 40 years, among them Portugal, Slovenia, Bolivia, Austria, Slovakia and Monaco. He has just finished serving as ambassador in France and UNESCO. He currently serves as Rector of the “Academia Diplomática del Perú Javier Pérez de Cuéllar.”

Alfonso W. Quiroz specializes in Latin American, Caribbean, and world history, with an emphasis on economic history and policies. He received his B.A. in history from the Universidad Católica in Lima and an M.A. (1981), M.Phil. (1983), and Ph.D. (1986) from Columbia University. He joined the history department of Baruch College and the Graduate Center, City University of New York, in 1986.

Leonardo Vivas is Coordinator of the Latin American Initiative of The Carr Center for Human Rights Policy at Harvard University. He is a Sociologist from Central University in Venezuela, with an M.Phil from University of Sussex, UK, and a Ph.D. from Nanterre Université in Paris. He currently teaches Latin American Politics at UMass-Lowell. He founded and for several years has led Latin Roots, an organization devoted to Latino Culture and Education in Massachusetts. Leonardo has been a fellow and associate researcher at the Weatherhead Center for International Affairs at Harvard University. At Tufts University he taught a course about the Chavez Era in Venezuela. In Venezuela he was Director of Industry in the Development Ministry and founder of several nonprofit organizations. Professor Vivas has published two books about Venezuela’s political crises and co-edited another about grass roots management. He writes for the media both in the Boston area and in Venezuela.