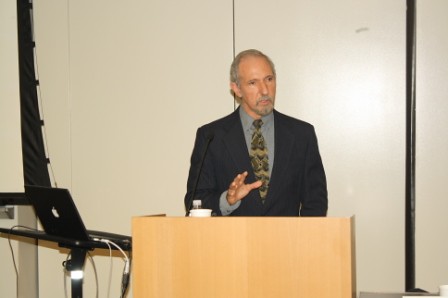 Cuban Miami and US Policy toward Cuba: The 2011 Poll in Perspective

The current migration agreement was established between the U.S. and Cuba. The first decade of the 21st Century has seen the legal entry into the United States of 300,000 Cubans, the largest sustained migratory influx in the history of the two countries. These new migrants are changing the Miami area in a variety of ways. They have the potential to change the political tendencies of the population towards the mother country as well as influence U.S. policy. Are Cuban-Americans in Miami changing their attitudes towards the island? Are these changes being reflected in behaviors, such as voting, the sending of remittances and travel? The FIU Cuba Poll, conducted by Dr. Grenier since 1991, provides evidence of the changes and continuity of Cuban-American attitudes and behaviors towards the island as well as towards U.S./Cuba policy. Dr. Grenier will present the most recent results from the 2011 Cuba poll completed in September of this year with funding from the Ford Foundation and the Department of Global and Sociocultural Studies at FIU.

Guillermo J. Grenier is Professor of Sociology and Graduate Program Director in the Department of Global and Sociocultural Studies at Florida International University, the State university of Florida in Miami. Born in Havana, Cuba, Dr. Grenier received his undergraduate education at Emory University and Georgia State University in Atlanta, Georgia and his Ph.D. from the University of New Mexico.
One of the founders of the Miami School of social analysis, Dr. Grenier is the author of numerous books and dozens of articles on labor, migration, immigrant incorporation, and Cuban-American ideological profiles, particularly in the Greater Miami area and lectures nationally and internationally on his research. His books include Inhuman Relations: Quality Circles and Anti-Unionism in American Industry (Temple University Press, 1988), Miami Now! Immigration, Ethnicity and Social Change, edited with Alex Stepick (University of Florida Press, 1992), Employee Participation and Labor Law in the American Workplace, with Ray Hogler (Quorom/Greenwood, 1993), Newcomers in the Workplace: Immigrants and the Restructuring of the U.S. Economy, with Louise Lamphere and Alex Stepick, (Temple University Press, 1994. Winner of the Conrad Aresnberg Award, American Anthropological Association), Legacy of Exile: Cubans in the United States, with Lisandro Perez (Allyn and Bacon, 2002), This Land is Our land: Newcomers and Established Residents in Miami, with Alex Stepick, Max Castro and Marvin Dunn (University of California Press: 2003).
His current book length manuscript and most recent articles explore the social dynamics of the Cuban-American ideology. Dr. Grenier initiated the FIU Cuba Poll in 1991 and has conducted regular surveys of the Cuban-American political attitudes roughly on a bi-annual basis ever since. The Cuba Poll the longest running research project tracking the ideological tendencies of the Cuban-American community in South Florida.

Lisandro Pérez received his Ph.D. in Sociology and Latin American Studies from the University of Florida. Until the summer of 2010 Dr. Pérez served for twenty-five years on the faculty of Florida International University (FIU) in Miami where he founded and directed its Cuban Research Institute after two terms as Chair of its Sociology and Anthropology Department. He also served as the editor of the journal Cuban Studies from 1999 to 2004 and is the co-author of the book The Legacy of Exile: Cubans in the United States, published by Allyn & Bacon. He authored the chapter on Cubans for the The New Americans: A Guide to Immigration Since 1965, published by Harvard University Press. During the 2004-2005 academic year, Dr. Pérez was a fellow at the Cullman Center for Scholars and Writers of the New York Public Library, where he carried out research for a book on the Cuban community in New York City during the nineteenth century, under contract with New York University Press. An essay based on that research project appeared in the edited book New York 400 published in 2009 by the Museum of the City of New York. He served as consultant for the 2010 exhibit Nueva York sponsored by the New York Historical Society and exhibited at the Museo del Barrio and wrote a chapter for the exhibits companion book, published by Rizzoli Publishers. In addition to the Cullman Center, Dr. Pérez has received fellowships and grants from the National Endowment for the Humanities, the Rockefeller Foundation, the Ford Foundation, and the Gilder Lehrman Institute of American History.