This panel discusses the evolving debates and agenda about the role of the state in Brazilian society. It also helps launch the new volume, The Brazilian State: Debate and Agenda (Rowman & Littlefield, 2011) edited by Professors Mauricio Font and Laura Randall, with the special assistance of Janaina Saad. A small reception will be held before the panel discussion.

John D. French is professor of History and African and African-American Studies at Duke University whose books include The Brazilian Workers’ ABC (1992), Drowning in Laws: Labor Law and Brazilian Political Culture (2004), and a co-edited volume The Gendered Worlds of Latin American Women Workers (1997). He is currently finishing a manuscript entitled Lula’s Politics of Cunning: From Trade Unionism to the Brazilian Presidency. 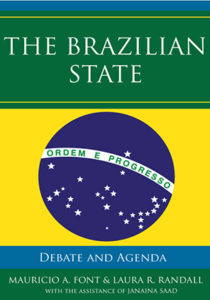 We are delighted to announce the launch of the book The Brazilian State: Debate and Agenda (Rowman & Littlefield, 2011) edited by Professors Mauricio Font and Laura Randall, with the special assistance of Janaina Saad.
Part of the Bildner Western Hemisphere Studies series, The Brazilian State explores the changing roles, relation with society, and overall impact of the contemporary Brazilian State. The 16 chapters by scholars from Brazil and the United States contribute to the understanding of various policy areas in an emerging and fast-growing country. Collectively, the papers probe the relationship between state reform, institutional development, policy effectiveness, and economic dynamics since the 1930s, and provide analyses of issues that will be the center of debate in the presidency of the newly-elected Dilma Rousseff.