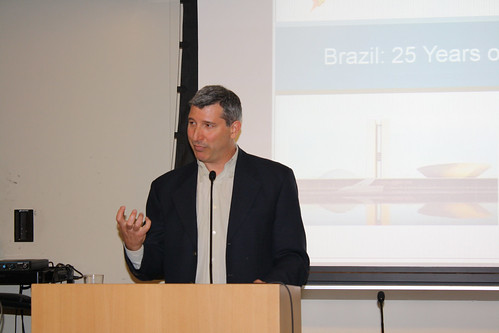 Mauricio Font, The Bildner Center and The Graduate Center

This is the first event in the new seminar series, “Brazil: 25 Years of Democracy,” which will be held throughout the academic year 2010-2011. In this initial panel, Professor Peter Kingstone will discuss the sources of Brazil’s successes relative to the low expectations at the start of the New Republic. Peter Kingstone will be joined by Bildner Center’s director Mauricio Font and a third panelist (TBA) to commemorate and reflect on 25 years of democracy and reform in Brazil.

About the Speakers:
Peter Kingstone is Associate Professor of Political Science at the University of Connecticut. He received his Ph.D. from the University of California, Berkeley. He is the author of Crafting Coalitions for Reform (with Penn State University Press), co-editor (with Timothy Power) of Democratic Brazil: Actors, Institutions, and Processes (University of Pittsburgh Press) and Democratic Brazil Revisited (University of Pittsburgh Press, 2008), as well as editor of Challenges to Democratization: Readings in Latin American Politics (Houghton Mifflin). He has published a number of articles on various aspects of the politics of economic reform in journals such as Comparative Politics, Comparative Political Studies, Political Research Quarterly, Latin American Politics and Society, and Latin American Research Review. He is currently working on projects related to neoliberal reform and its alternatives and pension reforms and privatization in Argentina, Bolivia, Brazil and Venezuela.