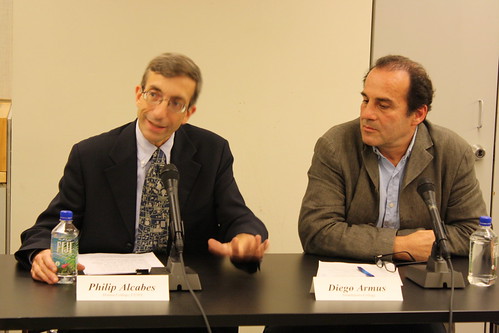 About the Speakers:
Philip Alcabes is currently Associate Professor in the Program in Urban Public Heath at Hunter College’s School of Health Sciences and in the doctoral public health program at the CUNY Graduate Schools. He is also a member of Hunter’s Council on Honors. In addition to his Hunter appointment he holds a visiting faculty appointment at the Yale School of Nursing.
Alcabes’s new book Dread: How Fear and Fantasy Have Fueled Epidemics from the Black Death to Avian Flu (PublicAffairs, 2009) is a history of how people have thought about epidemics in the western world. Alcabes’s essays on the history, policy, and ethics of public health have appeared in The American Scholar, Virginia Quarterly Review, and the Chronicle of Higher Education, as well as peer-reviewed journals. Previously, he conducted epidemiologic research on the epidemiology of AIDS and other community-acquired infections, social issues in the spread of epidemics, and methods for the statistical study of infectious diseases. Outside the university, Alcabes is a member of the scientific advisory board of the World Trade Center Registry project in NYC. He has consulted on public-health policy and AIDS-prevention projects in Eastern Europe for the Open Society Institute, World AIDS Foundation, and Fogarty International Foundation of the National Institutes of Health.
Alcabes graduated from Union College and holds masters degrees in biochemistry (U. of California, Berkeley) and public health (Columbia University). He earned a Ph.D. in infectious-disease epidemiology in 1993 from the Johns Hopkins School of Hygiene and Public Health.