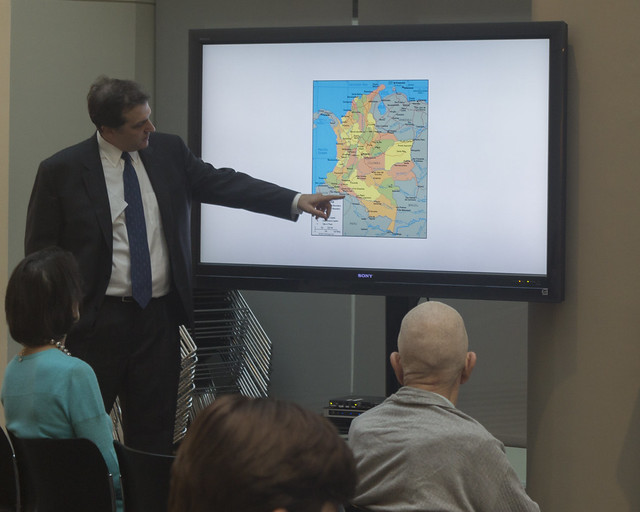 This talk focuses on two regions: Urabá, a drug and human smuggling transit region in the north, and Putumayo, a coca producing area in the south, to understand the different forms of non-state governance that operate in the country. It outlines how both licit and illicit economic practices in each region produced and contributed to the varied hybrid governance structures that operate in these regions. The analysis provides a framework for considering both what drives different forms of governance in Colombia’s regions but also will enables scholars to disaggregate the dynamics the underlie disjunctive democracy, violence pluralism, and grey areas in Latin America more broadly.

Desmond Arias (PhD, The University of Wisconsin) is the Marxe Chair in Western Hemisphere Affairs and Professor at Baruch College, CUNY. His research focuses on security and politics in Latin America and the Caribbean. He is author of Criminal Enterprises and Governance in Latin America and the Caribbean (Cambridge University Press, 2017), Drugs and Democracy in Rio de Janeiro: Trafficking, Social Networks, and Public Security (University of North Carolina Press, 2006) and is co-editor of Violent Democracies in Latin America (Duke University Press, 2010). He has served as a consultant to the Ford Foundation, the United Nations Development Programme, the United Nations Office on Drugs and Crime, and the United Nations Human Settlement Programme (UNHabitat). He is currently working on a book on crime in South American cities with colleagues at the University of Chile and is starting a project on illicit organizations and governance in Colombia and Afghanistan.

Janice Gallagher (PhD, Cornell University) is assistant professor of Political Science at Rutgers University-Newark. Gallagher is interested in how everyday citizens respond to violations of their rights, and examines how social movements, state institutions and other non-state actors affect judicial accountability and human rights compliance. Her first book, Bootstrap Justice: The Search for Mexico’s Disappeared, is currently under review. It explores why, how and to what effect people have mobilized in response to the crisis of disappearances in Mexico. Her next project focuses on access to justice, and compares how inequality shapes citizens’ interactions with legal institutions using a comparative research design between Latin America and the United States.