Bildner Center » Coffee, Contention, and Change in the Making of Modern Brazil 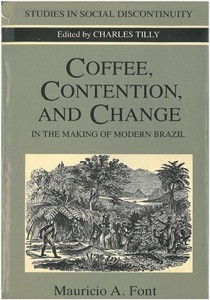 This book provides a new interpretation of a crucial period in the history of modern Brazil. It also challenges a pivotal tenet of development theory. The Revolution in Brazil in 1930, and the social, political, and economic movements in São Paulo and the south which led up to and followed it, have long been the subject of scrutiny by Latin American Scholars. The dependencia school of Cardoso and Fernandes and the Paulista school in sociology have generalized from their analysis of change in Brazil to argue a broad explanation of patterns of development: they describe a process in which, characteristically, coalitions of export elites exercise power over policy making, industrialization and the national economy. The coffee exporters of Brazil, they argue, were a classic example of such a powerful elite.

Basing his interpretation on original research into the social organization of the coffee sector, Mauricio Font challenges the monistic view of industrialization in Brazil as over-simple and misleading. He is able to show that a powerful group of small and medium producers consistently defied the larger landholders and acted against their coherence and power. This much more complex picture provides the basis for his alternative explanation of the roles both of large and of small planters in the Revolution of 1930, the origins of which, he argues, lies less in external factors than in the internal workings of the export sector.

Coffee, Contention, and Change is at once a compelling account of the intimate workings of a society in ferment, and an important theoretical contribution to studies of social organization and change. It may well have a profound effect on what have hitherto been accepted accounts of the political and the economic evolution of developing nations.